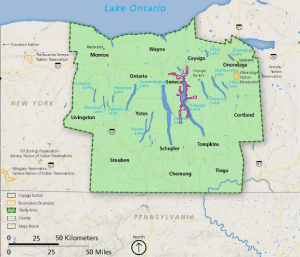 The National Park Service has announced it is seeking public input on a study to determine the feasibility of designating the Finger Lakes region of New York as a National Heritage Area.

The 90-day comment period for the Finger Lakes National Heritage Area Feasibility Study is being held until June 1st, 2021.

The Finger Lakes National Heritage Area Feasibility Study was authorized by the John D. Dingell, Jr. Conservation, Management, and Recreation Act of 2019, which directed the Secretary of the Interior to evaluate the natural, historic, cultural, educational, and recreational resources of the Finger Lakes. The study will assess if it is nationally worthy of recognition, conservation, interpretation, and continuing use; through designation as a National Heritage Area.

The legislation identified the following counties to be considered as part of the study: Cayuga, Chemung, Cortland, Livingston, Monroe, Onondaga, Ontario, Schuyler, Seneca, Steuben, Tioga, Tompkins, Wayne, and Yates. The feasibility study will also assess the demonstrated support of the community including businesses, residents, nonprofit organizations, and appropriate local, state and federal agencies.

The study’s assessment, along with any recommendations from the Secretary of the Interior, are expected to be reported to Congress. The study hopes to assess the region’s unique and important American stories, how they can be experienced by the general public, and how a potential new national heritage area would be organized by a coordinating entity, if one were to be designated by Congress. The study is expected to run through 2023.

The NPS has prepared the following materials to inform the public about the study and to solicit public comment:

An online ‘Story Map’ explaining the study’s purpose, authorities, and a summary of resources within the 14 county study area the NPS’ research has identified thus far.

A draft narrative summary of the NPS’ research and a detailed list of resources in table format can be found on the project website.

More information about the NPS National Heritage Areas program can be found here.