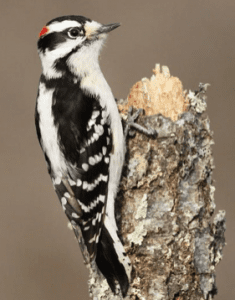 One morning early, as I slept in our mountain cabin Mateskared, a woodpecker landed on the cabin’s wood siding. Its profound rapid-fire pecking jerked me out of sound sleep.

Not in the Adirondacks.

One summer my friend Cub Schaefer’s girlfriend worked at the Adirondack Mountain Club’s Adirondack Loj. It’s a base camp for Adirondack High Peaks hikers and climbers. Cub, his sister Monica, and I drove there from Schenectady, New York, for the weekend. Cub’s girlfriend got the staff to let Cub, Monica, and me sleep in the long, empty bunkhouse.

The wood-sided bunkhouse had two-by-four framing, but the upright studs were placed way too far apart, no doubt in an arcane cost-saving mode. About 4:30 am, a woodpecker started blasting the siding halfway between two studs. The entire bunkhouse — and each of our skulls — made its territorial boom box.

Imagine a guitar box the size of a triple-length garage. That’s the woodpecker’s wake-up call, with its stout beak and insulated brain, hammering wood siding that all but flapped between those cost-saving, spaced-out studs.

Many years later my wife Chris and I had wealthy landlords — we rented their nearby tenant house — whose woodpecker tale involved the siding of their manor house. They tried everything they knew, and several things other people knew, to discourage the woodpecker. Nothing worked. Finally someone advised them to spread Vaseline on the siding. They did, and the woodpecker quit, discouraged by his or her lack of purchase on the greasy siding.