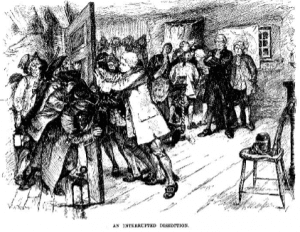 Grave robbing has a long history in religion and science. As monasteries and churches were repositories of relics, religious institutions competed to take possession of bones, teeth, or skulls. Members of the clergy supported grave robbers – long before the word came into circulation – if a body, or parts thereof, were worthy of reverence.

Deception played a part in the scramble for relics and there was a lively trade in bogus items. Reformer Jean Calvin suggested that by cataloguing each relic on display it would suggest that “every Apostle has more than four bodies, and every Saint two or three.”

Robbing graves in order to facilitate scientific study goes back to Michelangelo and Leonardo da Vinci who were known to have removed bodies from morgues for research purposes. In the eighteenth century, grave robbers prospered as expanding medical schools struggled with a limited supply of bodies for dissection. In a clandestine trade, anatomists paid robbers to dig up freshly interred bodies. Winter was the preferred season as cold weather slowed down putrefaction.

In all major cities, there was intense anxiety about the presence of body snatchers. On various occasions their activities led to a public outcry. The procurement from the graves of recently deceased bodies caused a mass riot amongst poorer New Yorkers in April 1788. The unrest lasted for several days and calm was ensured only after the militia took to the streets. Known as the “doctor’s riot,” the violence was not only directed at criminals, but also at medics and students at local hospitals.

For some considerable time to come, the public feared and despised physicians.

There are close links between medicine and the founding of museums. By the late 1600s, anatomists had begun to collect and exhibit body parts. Frederik Ruysch was a Dutch pioneer in the technique of preserving organs. He used his skills to produce “sculptural” arrangements and dioramas. On display in Amsterdam, his cabinet of specimens was hailed as the “eighth wonder of the world.”

In London, physician Hans Sloane assembled a vast variety of minerals, shells, and anatomical specimen, as well as a collection of some 50,000 printed books and manuscripts, mostly in the field of medicine and natural history, which would form the basis of holdings at the British Museum.

Surgeon John Hunter shared his era’s passion for collecting. He was an obsessive experimenter and hoarder of freaks and oddities. His hunt for samples verged on mania as he showed no inhibition in the manner by which those were obtained. Hunter’s catalogue of over 3,000 exhibits constitute the holdings of the Hunterian Museum at London’s Royal College of Surgeons. 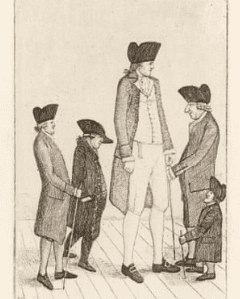 On February 20th, 1886 the Kensington Express reported that workers excavating the grounds at Earl’s Court House had removed numerous bones. As the estate had been Hunter’s home, it was assumed that these were remnants of the anatomist’s “experimental” projects. The report also suggested that a massive copper kettle hidden away in an outbuilding may have been used to render the corpse of the “Irish Giant.”

On his death in 1783, Ulsterman Charles Byrne was recorded as measuring eight feet and four inches (254 centimeters). In life, the “Giant” had joined a touring exhibition. Suffering poor health, he was terrified that his corpse would fall in the hands of anatomists. He gave instructions for his remains to be sunk at sea.

When John Hunter learned the news of Byrne’s demise, he bribed the undertaker and had the body stolen before reaching the coast. After treatment, Charles was put on display as part of Hunter’s anatomical collection. Once obliged to put himself on view in order to earn a living, Byrne remained an exhibit in death. The “chirurgical fraternity” showed no mercy.

Born on 16 July 1821 in New York, Charles Freeman’s family moved to St Joseph, Michigan, when he was a child. He grew up on a farm, a youngster of unusual size with great strength and agility. At the age of nineteen Charles traveled to New York and from there to Boston. Named the “American (or Michigan) Giant,” he featured as an “exhibit” in Jonathan Harrington’s short-lived museum, a Samson of physical power. He was presented as Hercules and Apollo Belvedere combined in one person.

Six years older than Freeman, bare-knuckle boxer Ben Caunt was the English heavyweight champion. Known as “Big Ben,” his final fight took place in 1857 at a time that the Great Bell was in process of being installed in clock tower of the Palace of Westminster. It is possible that Caunt’s presence was responsible for the bell’s nickname.

When in September 1841 Tom Hyer beat Country McCloskey in a brutal fight at Caldwell’s Landing, New York, lasting three hours or 101-rounds, Big Ben sailed to America to challenge him for a world championship bout. Hyer never bothered to turn up or reply to the request.

While on tour in Philadelphia, Caunt’s attention was drawn to a newspaper notice in which the Michigan Giant invited him to meet for a match. He traveled back to New York and was impressed by the might of his challenger’s seven-foot and six-inch frame (229 centimeters). Big Ben envisioned a profitable partnership. He refrained from fighting Freeman, but the pair provided plenty of entertainment by sparring on stage.

Caunt persuaded his partner to return with him to London. Before leaving on 19 February 1842, he tipped off members of New York press. Their headlines proclaimed that the giant American was crossing the Atlantic to lay claim to the Championship of the World. 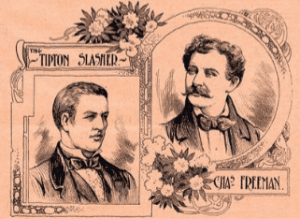 In England, the two men toured various cities and continued theatrical boxing exhibitions. On December 14th, 1842, a bare-knuckle prize fight was set up between Freeman and William Perry (an experienced fighter better known as the “Tipton Slasher”) despite the American having no experience of such contests.

It was hyped by the promoters as the first world heavyweight championship under the London Prize Ring rules as they had been promulgated in 1838. These measures outlawed butting, gouging, scratching, kicking, biting, hitting a man while down, holding the ropes, and using stones or other hard objects in the hands. 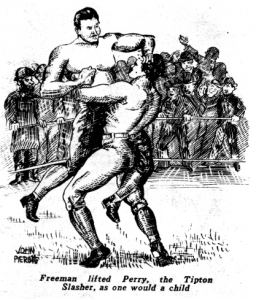 The bout took place at Sawbridgeworth, Hertfordshire, and was adjourned after seventy rounds due to darkness falling. An attempt to stage a re-match on December 15th was abandoned as the authorities intervened. The re-match took place five days later, at Cliffe Marshes, Gravesend. When Perry collapsed after thirty-eight rounds, Freeman was declared the winner.

Charles then gave up boxing. For a while he worked as a barman at the Lion and Ball tavern in Red Lion Street, Holborn, where he entertained the regular crowd and attracted many new patrons. In early 1843 Freeman performed a stunning circus act, galloping on two horses around the arena, arms above his head, whilst balancing a man in the air.

Charles did not return to New York but remained in England, hitting the road as a theatrical acrobat. Touring on the south coast in May 1845, he performed in Brighton, Worthing, and on the Isle of Wight where he fell ill. He died of pneumonia at Winchester Hospital. 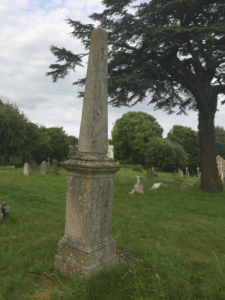 Caunt proposed to take the body back to London, but apparently Charles had made the request to be buried at Winchester’s West Hill Cemetery. Freeman’s funeral took place on October 23rd, 1845. Big Ben was his chief mourner. A flat slab was laid over the grave as a memorial.

In June 1860, Freeman’s grave was unexpectedly marked by a stone obelisk. On July 7, 1860, the Hampshire Chronicle reported a brief visit by an American celebrity to Winchester. Pugilist John Camel Heenan, the “Benicia Boy,” (born in West Troy, now Watervliet, NY) had arrived in Britain in January that year to prepare for the much anticipated prize fight with Tom Sayers.

He traveled to Winchester in order to inspect the monument erected over Freeman’s grave for which he had given the order. As Heenan was only eleven when Charles died, the two would never have met. It was an act of respect paid by one fighter to the memory of another. 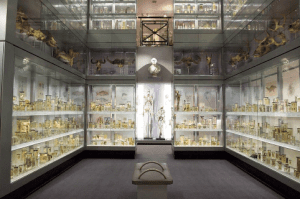 Uncomfortable details began to emerge when Freeman’s frame was exhibited next to that of Byrne at the Hunterian Museum. It was suggested that the dead body had been sold (or robbed from the grave) and passed on to the Royal College of Surgeons. The skeleton remained on show until, at some time in the museum’s recent history and for reasons unknown, it was removed as an exhibit.

The Hunterian, London’s “weirdest” museum, closed in May 2017 for substantial renovation work and is scheduled to reopen in late 2022. At a time in which we discuss the return of “stolen” works of art to their places of origin, curatorial staff will have to answer legitimate questions.

Should Charles Byrne finally be buried at sea? Is there a case for Charles Freeman to be returned to Winchester – or perhaps Michigan?

Illustrations, from above: A wood engraving of New York rioters trying to break their way into a doctor’s dissection area; Charles Byrne depicted with various Edinburgh notables. (Alamy Stock Photo); Tipton Slasher versus Freeman poster; Drawing published in The Ring Magazine, September 1931; The obelisk on Freeman’s grave at West Hill Cemetery, Winchester; Exhibits at the Hunterian Museum. (Royal College of Surgeons of England).