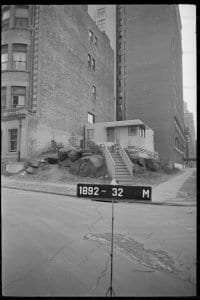 Beginning at 5:30 pm, “tour guides” Julian Boilen, Gil Tauber and Jim Mackin will lead a virtual tour of the streetscapes of Bloomingdale as it existed 80 years ago.

Between 1939 and 1941, the Works Progress Administration (WPA) collaborated with the New York City Tax Department in an effort to photograph every building in the five boroughs of the city of New York.

This ambitious project yielded a trove of thousands of photos of most of the city’s buildings, which, in 2018, were digitized and tagged by the NYC Municipal Archives.

In 2019, the web developer, Julian Boilen, built an online map that makes it possible for users to explore a city lost to time. Boilen’s project is both the inspiration and the basis for the evening’s program which has been constructed much like a tour.

Boilen will explain how he came to build his map and Mackin and Tauber will narrate the story of pieces of Bloomingdale that have been forgotten since the WPA photographers captured them on film.

For more information or to view the program, visit the Bloomingdale Neighborhood History Group website.