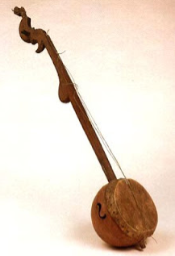 The modern banjo derives from mid-1600 instruments that had been used in the Caribbean by enslaved people taken from West Africa. The original version was made from a hollowed-out (hard-skinned) gourd and a varying number of horsehair strings. 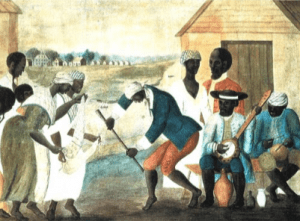 Initially the banjo was restricted to black culture. Written references to the instrument in North America appear in the eighteenth century. In his 1785 Notes on the State of Virginia, Thomas Jefferson noted that the “instrument proper to them [black slaves] is the Banjar, which they brought hither from Africa.” The instrument was made commercially available in the second quarter of the nineteenth century.

For a long time, the banjo remained emblematic for the troubled history of African-American slavery. From the first decades of the twentieth century onward, the instrument was associated with jazz. 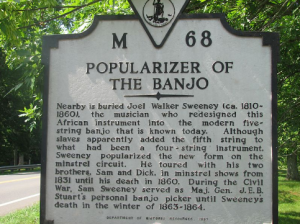 Black-face “entertainment” started in the 1820s when white men blackened their faces with burnt cork, imitating and exaggerating African-American people’s dance, song and talk. The appeal of minstrel shows was rooted in the assumption of black inferiority. With intensifying segregation, these shows became more extreme as mutual contacts diminished. When white entertainers embraced the banjo, it came at the expense of black cultural expression.

The five-string banjo was popularized by Joel Walker [Joe] Sweeney. Born to a farming family in the county of Appomattox, Virginia, he was taught to play the instrument by enslaved workers. In the early 1830s he took the banjo on stage and became the earliest recorded performer. By the end of the decade, he was playing in black-face minstrel venues in the city of New York.

In early 1843, he embarked on a successful European tour that included stops in London (where he performed for Queen Victoria), Edinburgh, and Dublin. The banjo had reached Britain. At the same time, the Virginia Minstrels, led by Dan Emmett, toured England and Ireland. Minstrel shows became the hottest attraction of British music halls. 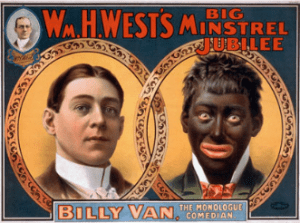 The fashion crossed the Channel. During the later 1840s Parisian cafés-concerts introduced the new sensation, featuring French singers with blackened faces. By the turn of the century, minstrel shows and cabarets were all part of the capital’s entertainment scene (and would inspire composers such as Claude Debussy and others).

The banjo was a mainstay of these shows in which African-Americans were portrayed – on the assumption of white racial superiority – as boisterous, but somewhat dim-witted characters.

Louis Moreau Gottschalk was born in May 1829 in New Orleans, the son of a Jewish Londoner and a French Creole mother who descended from Haiti. A precocious talent as a church organist and pianist, he was sent to Paris – aged thirteen – to continue his education under Camille-Marie Stamaty, the teacher of Saint-Saëns (having been turned down by the Conservatoire).

Gottschalk took the city by storm when he made his concert debut in April 1845 at the Salle Pleyel (the hall where Chopin premiered a number of works). The “young American” became a French idol. When in 1849 he returned to perform some of his own compositions, including Bamboula (named after an Afro-Caribbean drum) he received a standing ovation. Responding to his adoring audience, he composed and performed a Louisiana Quartet of Creole-inspired “jazzy” piano pieces.

Appearing in print in the late 1840s, Gottschalk’s compositions were based on songs, dances, and rituals of Louisiana slaves. These syncopated pieces became widely popular. By infusing indigenous American folk elements with European romantic structures, he captured his Parisian audiences and satisfied the era’s passion for exotic cultures. 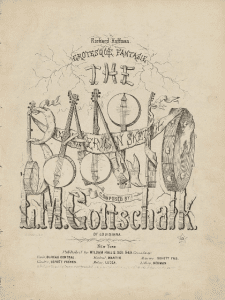 Having listened to talented local strummers during his formative years, Louis lifted the banjo out of its familiar context of black folk entertainment and transported the instrument to music rooms and concert halls that were traditionally reserved for the piano. In doing so, he muddled the boundaries among performance spaces and racial divisions that these instruments represented.

Gottschalk left Paris in late 1852 to settle in New York. During the summer of 1853 he composed the first version of “The Banjo” and submitted it for publication in 1854. The piece was first performed by himself in March 1855. This, his most popular composition, features unique imitations of African-American techniques (up-picking, down-stroking, or strumming) which give the composition historical relevance as to the sound of early African-American banjo playing.

The banjo-rage was given additional relevance by Pittsburgh-born painter Henry Tanner. His father Benjamin Tucker Tanner was an abolitionist and a bishop in the African Methodist Episcopal Church, the first nation-wide independent black denomination in America; his mother Sarah had been born into slavery.

Trained at the Pennsylvania Academy of Fine Arts, Henry was the only black student at the time. There he befriended Robert Henri, one of the founders of the Ashcan School of urban (New York) realism, with whom he kept in contact throughout his life.

Finding it difficult to bear racial strife in Philadelphia, he traveled to Paris in 1891. Tanner continued his studies at the Académy Julian under Jean-Léon Gérôme. He admired the work of Gustave Courbet and Jean-François Millet whose depictions of ordinary (rural) people at work or at home inspired him. The impact of these French masters can be traced in his work. Tanner’s paintings reflect the combined strands of American realism with that of French academicism.

As the issue of race mattered less in Parisian art circles and Tanner would spend the rest of his life in the French capital. Exile was a stimulant. He became the first famous African-American artist and was widely acclaimed for an oeuvre that consisted largely of biblical themes. In 1923, he was appointed Chevalier of the Légion d’Honneur, France’s highest national order of merit. 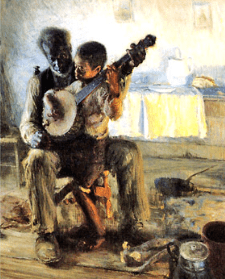 When he developed a bout of typhoid fever, the artist was advised to return to the United States to recover. Having accepted a teaching post at Clark University, Atlanta, Tanner’s doctor told him to take in some mountain air. A trip to North Carolina opened his eyes to the dire poverty of African-Americans living in Appalachia.

Having made a series of sketches and photographs of the area, he returned to Paris in 1893. He then produced his masterpiece “The Banjo Lesson,” the image of an elderly man teaching a young boy how to play the instrument.

Scenes of a black man playing the banjo had appeared throughout American art of the late nineteenth century, but more often than not these were reduced to minstrel stereotypes. Tanner’s painting took the subject away from type and lifted it to the serious level of character representation.

The intensity of human interaction in a setting of deprivation (the muted palette is a reminder of young Vincent van Gogh) added a spiritual element to the realism of the scene. Many critics have given a political interpretation to the painting. They associated the banjo with a narrative of past slavery (the old man) and future black liberation (the young boy).

Whatever political interpretation one may (or may not) attach to the depiction, the painting is first and foremost a celebration of music and a tribute to the inter-generational transfer of creative skills. 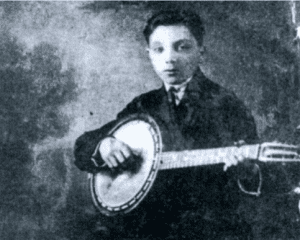 During the late 1920s there was another twist in the intercontinental history of the banjo. Django [Jean] Reinhardt was born in Belgium in a Romany gypsy caravan in January 1910. As a youngster he burned his left hand in a freak fire, but persevered playing the violin (with only two functioning fingers on his left hand). At the age of twelve he was given a banjo.

Self-taught, he began working dance halls in Paris playing a variety of genres, including new American styles of music. The word quickly spread: the “Gypsy Kid” was a prodigy. He made his first banjo recording in 1928, accompanying the now forgotten singer Maurice Chaumel.

In 1934 Reinhardt teamed up with violinist Stéphane Grapelli. Their Paris-based Quintette du Hot Club de France specialized in guitar and banjo-led gypsy jazz. In the spring of 1937, the band were contracted for a long-running gig at Chez Bricktop in Montmartre, managed by Ada “Bricktop” Smith, the exile from New York and Grand Lady of entertainment.

Reinhardt was a musical genius, but had the reputation of being unreliable and temperamental. Those who warned Ada against employing such a character were given short shrift. Music knows no character deficiencies, no boundaries, no gender, no social status, no color. She would encourage talent wherever she recognized it – whatever the psychological or financial penalty.

Together they made jazz and history, linking Harlem to Montmartre.