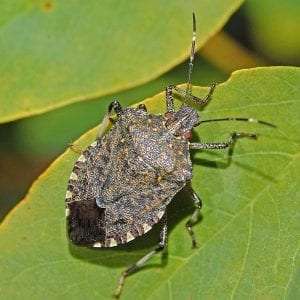 In general I’m rather positive about immigrants, but not the six-legged kind. Many of the insects which have made themselves at home here over the past few decades show up with interesting and colorful names like emerald ash borer, velvet longhorned beetle, and spotted lantern fly. Amusing monikers or not, this is a ménagerie of mischief-makers, and one of the more recent arrivals is quite a foul character indeed.

Native to eastern Asia, the brown marmorated stink bug (Halyomorpha halys), or BMSB to its pals, made its North American début near Allentown, Pennsylvania in 1998. The BMSB sucks the life out of many fruits and vegetables with a stout, straw-like rostrum or beak, leading to heartbreak for home gardeners and severe economic losses for commercial growers. Not only is the BMSB hard to control with pesticides, it has no effective enemies here, and as a result its populations can build up rapidly under the right conditions.

Beyond their impact on peaches, apples, berries, cherries, corn, tomatoes and other crops, the BMSB is a nuisance pest as well. As cold weather approaches, they seek shelter in dead trees, and often in garages and homes, too. They gather in such great numbers that folks have resorted to push brooms and scoop shovels to clear them off patios and porches. As you may have guessed by their title, these pests emit a pungent and enduring odor when disturbed or crushed.

Its name is kind of weird since we all know “marmorated” is a delicious jam typically made with orange peels and not very many bugs, but apparently the term refers to the BMSB’s color pattern. I assume that “brown-banded bug” was too alliterative for some entomologist’s tender ears, or maybe “variegated” had been bandied about too often.

The immature stages progress through a range of colors, but adults are marbled brown on top, with alternating bands of dark brown and beige on their antennae and abdominal edges. They are shield-shaped and about 8 mm (0.3 inches) wide by 14-17 mm (0.5 to 0.67 inches) long. For more help identifying stink bugs, click here.

The brown marmorated stink bug has now been detected throughout the US, and is well-established in over a dozen states and at least five Canadian provinces. It is causing severe agricultural losses in the mid-Atlantic region, and is a garden pest and home nuisance everywhere it is found. Obviously we could use a hand dealing with these pests.

Not many integrated pest management (IPM) strategies involve samurais, but as it happens, real live samurais have been brought in to help control the BMSB. To be specific, the samurai wasp (Trissolcus japonicus), a tiny insect that parasitizes BMSB eggs, has been imported from Japan and other parts of Asia.

This is not as exciting as an ancient warrior-caste coming to the rescue, but I imagine that might involve some magical realism, and would certainly present some very complex immigration issues. As it stands, the samurai wasp had to be closely studied before getting the green light to hop aboard. We all know that well-intentioned biocontrol efforts can go horribly wrong – just look at what happened with the Australian cane toad or the tragic case of the Old Lady Who Swallowed a Fly.

The term wasp can raise eyebrows, as most of us have crossed paths with aggressive wasps or hornets such as yellow jackets. But samurai wasps are nothing to worry about. They’re roughly the size of sesame seeds, and do not sting humans. They reserve their stingers to inject their own eggs into those of the brown marmorated stink bug, where teeny wasp larvae eat the BMSB eggs as they develop.

To our knowledge, native North American parasitoids combined only manage to kill ten percent of BMSB eggs, whereas samurai wasps are around 80% effective. Peter Jentsch, Director of Cornell’s Hudson Valley Research Laboratory, says that “As a biocontrol agent, the samurai wasp is not only very effective at reducing the population of brown marmorated stink bugs, but is the least environmentally damaging of all the options for controlling this pest in both urban and agricultural systems.” Jentsch has been rearing the wasps for release throughout NY State; similar efforts are underway in many parts of Canada and the US.