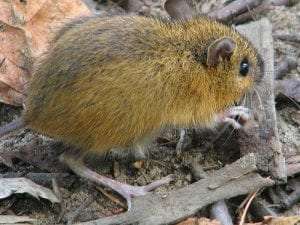 Winter is the time when wildlife activity ebbs. Many residents of our fields and forests have retreated to shelters beneath the surface of the soil in an attempt to escape this season of low temperatures, snow and ice, and little if any food.

The woodland jumping mouse (Napaeozapus insignis) is one member of our wildlife community that retires to the seclusion of a cushiony nest underground and lapses into a profound state of dormancy, known as true hibernation, for roughly six months beginning sometime in mid-October.

The jumping mouse spends the latter weeks of summer and the first part of autumn increasing its intake of food, allowing this common rodent with the exceptionally long tail to develop an internal reserve of fat. However, unlike the gushy white tissue formed by most creatures, the jumping mouse produces a rusty-tan colored substance known as brown fat. This highly caloric material contains a greater concentration of fatty oils than white fat, and also possesses many more mitochondria, internal cellular structures that are essential in the burning or oxidation of the oils in each cell. Because of its unique composition, brown fat can quickly and effectively convert the chemical energy stored within it into heat.

Human infants have deposits of brown fat when they are born, which assists them in maintaining a favorable body temperature for the first few days of their life outside the womb. As they begin to regularly ingest milk and develop their digestive tract, their reliance on brown fat fades and any of this unused fat is eventually absorbed into their developing skeletal system.

After the jumping mouse settles into its nest for the winter, its body temperature drops to that of its surroundings causing a substantial reduction in its metabolism. As the ground cools throughout the autumn, the mouse’s core temperature may approach the mid-30s. Consequently, the body of this small rodent needs to generate only the smallest amount of heat and energy to remain alive.

Since there is a significant reduction of the jumping mouse’s rate of respiration, its need for oxygen likewise is substantially reduced. Should the ground become covered with a thick layer of snow and ice, preventing air from easily permeating the frozen soil, the limited supply of this essential gas present in the tunnels and chambers of the burrow complex will be adequate to meet the jumping mouse’s minimal need for oxygen.

Yet, rather than remain in this state of suspended animation for the entire winter, the jumping mouse periodically burns a portion of its brown fat to elevate its body temperature to a normal level causing it to awaken. After returning to a state of consciousness, the animal is known to briefly exit its nest and visit that section of its burrow which is used for the deposit of solid and liquid wastes. The mouse then returns to its nest and quickly falls back into a deep state of dormancy, or true hibernation, for another 2 to 3 weeks until it awakens again.

Scientists are of the opinion that these periodic awakenings throughout the winter allow the animal the opportunity to exercise its muscles and provide for the reactivation of its brain. During true hibernation, the brain, like all of the other organs, shuts down almost completely. In order to maintain a healthy mental state, the brain must be restarted every 2 to 3 weeks. Since brown fat is highly effective in generating heat, burning this tissue provides the jumping mouse with the opportunity to raise its body temperature numerous times throughout the winter in order to bring about the conscious state that the brain requires to remain functional.

The notion of the woodland jumping mouse lying totally unconscious for the entire winter is a popular one, but it has been shown to be incorrect. All creatures, including bats that are labeled as true hibernators, do awaken every few weeks throughout this season. While they may never exit their subterranean retreat and leave a record of their activity, such as footprints in the snow, scientists that study this form of winter dormancy assure us that there are times when these creatures, like the woodland jumping mice, are active, yet are out of our view under the frozen soil here in New York State.