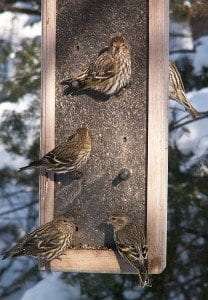 During winter, the possibility exists that a transient flock of birds may suddenly appear at a feeder and dominate the local seed supply for several weeks before exiting the area. The presence of a mob of gluttonous evening grosbeaks, redpolls or purple finches can quickly decimate a mass of sunflower seeds, leaving little for the regulars like chickadees, nuthatches, and an occasional blue jay or cardinal.

Yet despite the highly competitive feeding habits exhibited by the gregarious members of the finch family, there is always one irregular winter visitor that is enjoyable to have in the neighborhood for a few weeks. With a petite body shape, a stylish hint of yellow on its wings and tail, and a drawn-out, single syllable call that sounds more like an insect than a bird, the pine siskin never fails to add a touch of charm to its surroundings.

The pine siskin is a hardy bird that has evolved for surviving the rigors of life in northern forests and fields. Like nearly all finches, this bird has a strong bill adapted for cracking the covering that encases the tiny packet of nutrients within the seed. Since most trees, shrubs, and herbaceous plants that thrive at higher latitudes produce smaller seeds than plants that characterize warmer, more temperate regions, the bill of this bird is better suited to pick up and manipulate smaller items. A siskin’s bill is also effective in extracting the seeds of pines, spruces, cedar and hemlock from their cones as well as the tiny seeds of birch and alder from the clusters that form on the twigs of these plants.

While the seeds of one species of plant or another is usually available to this bird after the growing season has ended, there are years when entire seed crops fail because of unfavorable environmental factors. For example, a prolonged period of excessively dry weather may negatively impact a multitude of plants as they attempt to develop seeds. A hard freeze after a plant’s flowers have matured and gone to seed or an infestation of seed eating bugs or fungus can wreak havoc with the development of this important food source.

During years when food in the immediate area is in short supply or completely fails to develop, this pine siskin turns to its nomadic instinct and begins to travel well outside of its traditional range in search of items to eat. Researchers have determined that pine siskins may fly over a thousand miles southward from the north and to the east from their range in the softwood forests of the Rockies.

When seed crops in the vicinity of its home range are adequate, the pine siskin remains in these cold, softwood settings for the duration of the winter despite the harsh conditions. As it feeds during the day, a pine siskin regularly ingests more seeds than it can process. The extra items are stored in an elastic sac, known as a crop, located at the base of its throat. After the bird returns to its night time roost, the contents from its crop are released to its digestive tract for processing, and absorption into its system. The quantity of food stuffed into its crop is estimated by researchers to provide enough nourishment for an additional 4 hours.

Small deposits of fat are also used by this bird during bitter cold nights to provide the thermal energy needed to prevent hypothermia from developing. On days when the temperature is relatively mild, and a layer of clouds prevents the temperature from dropping below zero, the excess food a siskin consumes is converted into fat. This allows the bird to periodically recoup energy expended on nights when well below zero weather settles over the region.