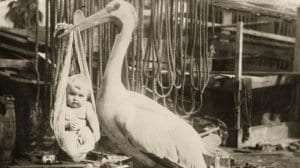 A pun is a fitting way to celebrate the birth of a child to a fellow newspaper editor.

“Editor G.A. Weller of The Granville Sentinel rejoices over the addition to his family of a feminine ‘supplement’ weighing over eleven pounds,” The Morning Star of Glens Falls reported on September 22nd, 1885.

Nineteenth century birth announcements were a far cry from those of the modern era, which stick to the basic facts of name, gender, birth weight, parents, and date, time, and place of birth.

“Joe Green is the happiest man in town. His wife presented him with a son yesterday,” The Granville Sentinel reported on July 9th, 1886.

“There is a new arrival in the form of a chubby boy at the residence of B. Hophing, River Street,” South Glens Falls, The Morning Star reported on August 26th, 1885.

Cornell University English professor William Strunk Jr. did not write the first edition of Elements of Style, long a standard usage manual, until 1918, a year before it was first published.

The first edition of the AP Stylebook was not published until 1953.

News of births in the 19th century was primarily gathered by reporters working their beats, not via standardized reporting forms.

The federal government established the first standardized birth certificates in 1907, five years after the U.S. Census began collecting birth information, according to The American Bar Association.

“’Unto us a child is born.’ Tuesday at the residence of Lee Wait, a daughter to Mr. and Mrs. Edgar Wait,” the Shushan correspondent to The Granville Sentinel reported on March 18th, 1887.

The North Granville correspondent, in the same issue, reported, “Mr. and Mrs. Oscar Mitchell are rejoicing over the advent of a daughter.” Sometimes a birth announcement contained a hint to the father’s occupation.

“A young musician has arrived at the home of Mr. and Mrs. Fred Tillotson. The little gentleman tips the scale at ten-and-one-half pounds,” The Morning Star reported on June 10th, 1885.

Local readers of that era would have known that Fred Tillotson was a popular dance orchestra leader in the region.

Sometimes a birth announcement was combined with a weather report.

“Another snow storm Friday night, and a boy to support, sings John McCoffer,” the Adamsville correspondent to The Granville Sentinel reported on January 7th, 1887.

The child’s name was the most frequent detail omitted.

“A little lady boarder arrived at the home of Mr. and Mrs. Abdon Lanlais, New Street, on Friday morning: weight, thirteen and a half pounds,” The Morning Star reported on March 23rd, 1885.

And on October 22nd, 1885: “There is rejoicing in the household of Thomas Gallagher over the advent of a plump and healthy infant of the masculine gender.”

If newspaper editors can be believed, virtually every newborn had great intelligence.

“A bright little boy made his appearance at the home of E.D. Bissell last Sunday night: weight, ten pounds and a quarter,” The Morning Star reported on September 4th, 1885.

“A bright little boy visitor has taken up his residence with Mr. and Mrs. Henry Lord,” The Morning Star reported on March 30th, 1885.

“Mr. and Mrs. David Cooney, Mohican Street, rejoice at the arrival at their domicile of a bright little girl,” The Morning Star reported on August 25th, 1885.

Perhaps this newborn had above average manners as well as intelligence.

“A bright little gent arrived at the home of Mr. and Mrs. Walter Dix Thursday evening,” The Morning Star reported on August 11th, 1885.

This newborn was destined for athletic as well as scholastic achievement.

This newborn not only was intelligent, but was a perfect example of femininity.

“A bright little epitome of woman arrived at the home of Mr. and Mrs. William Monty on Thursday evening,” The Granville Sentinel reported on August 26th, 1887.