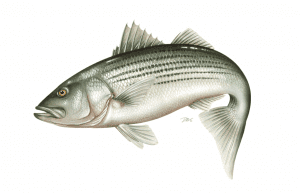 Striped bass (Morone saxatilis), an ecologically, recreationally, and economically important species of migratory fish found in from the St. Lawrence to North Carolina, are in decline according to the Atlantic States Marine Fisheries Commission.

Last fall the Commission completed a coastwide assessment that overfishing was a contributing factor in the decline.

Adult “stripers” spend most of their life in coastal waters. Each spring, most return to the fresh water rivers that feed into the Chesapeake Bay, and the Delaware and Hudson Rivers, the major spawning grounds for the coastal migratory population. The Hudson River acts as a nursery for the newly hatched “young of year” bass and in early fall they begin moving out of the estuary into near shore coastal areas. 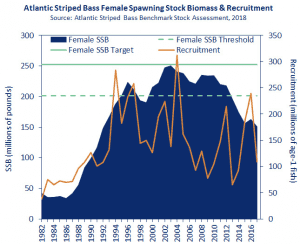 “Mortality rates during angling in freshwater, especially with the use bait such as herring, can exceed 15 percent – meaning that 15 of 100 fish caught by anglers die from stress from over-exertion or from hooks that are swallowed, damage organs, or cut the gill filaments after they are released,” according to Riverkeeper‘s George Jackman. “Mortality rates will increase with rising water temperatures, because low dissolved oxygen levels occurring in warmer waters add further physiological stress on the fish.”

To manage the species, the Atlantic States Marine Fisheries Commission (ASMFC) requires New York State to provide catch information from its recreational fishery, which in recent years has been substantially under-estimated.  DEC asks anglers to participate in their Striped Bass Cooperative Anglers Program.

As part of the program, DEC provides volunteer anglers with logbooks and instructions to record catch information such as fishing location, gear used, and number of fish caught. Anglers may participate whether fishing by boat or from the shore. Volunteers return their logbooks at the end of the season. Biologists then analyze the recreational fishery data and send it to anglers in a newsletter, providing an inside look into the striped bass fishing season. Participants also receive the latest news and information about regulations and annual fish population surveys.

Anglers can also help protect the resource by understanding their impacts and how they can reduce them.  “Rough handling, prolonged exposure out of water, and careless hook removal place additional stresses on the fish,” Jackman says. “Fish require oxygen to recover and survive, so it is best not to take a fish to be released out of the water. Lifting an exhausted fish out of the water is like placing a plastic bag over the head of a sprinter who just ran a race. Fish that are visibly stressed should be kept in the water and moved back and forth, allowing water to pass over their gills to revive them, until the fish can swim on its own.”

DEC has proposed a new requirement for recreational anglers to use circle hooks starting with the 2021 season, which opens on April 1 in the Hudson River, and April 15 in marine waters, a requirement Riverkeeper supports.


• Use proper weight-class tackle to avoid unnecessarily tiring the fish;
• Land your catch quickly, don’t “play” them too long;
• Leave the fish in the water as it is being released;
• Use inline circle hooks when using bait;
• Do not use the use treble hooks;
• Replace treble hooks on lures with single shanked hooks
• Always use a net when removing a fish from the water (Gaffs are prohibited in freshwater);
• Crimp your barbs to reduce damage to the fish when removing hooks. Proper angling technique prevents the need to use barbed hooks. Maintaining tension on the line at all times can prevent the fish from shaking the hook, even barbless ones;
• When taking photos of fish to be released, the goal is to get the fish back in the water promptly. 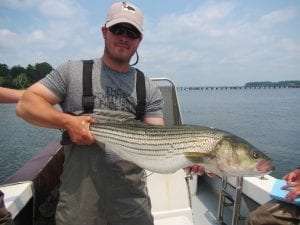 Anglers may choose to use DEC’s new online logbook and record catch information on their smartphone or computer.

Anglers who fish for striped bass in New York’s marine waters south of the George Washington Bridge should contact the Diadromous Fish Unit at sbcaprogram@dec.ny.gov or visit DEC’s Striped Bass Cooperative Anglers website. In marine waters, the recreational slot limit is 28 – 35 inches (not less than 28 inches nor greater than 35 inches) and the season is open April 15 through Dec. 15.

The recreational striped bass possession limit for all waters in New York State is one fish per angler.

Photo of striped bass hauled out of the water for a photo opportunity provided by DEC.