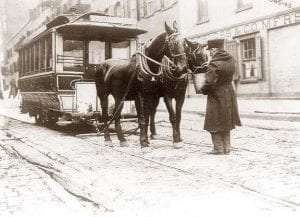 Return with me to the thrilling days of yesteryear when the automobile was viewed as the solution to transportation noise, fumes and congestion.

A lot of horses. 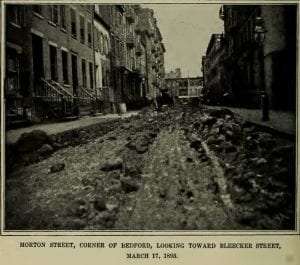 In late nineteenth century, New York contained somewhere between 150,000 and 200,000 horses. All transport, whether of goods or people, was drawn by horses, from fancy carriages pulled by the finest breeds, to cabs and horse trolleys and countless carts, drays, and wains –  all working to deliver the goods needed by the City’s rapidly growing population.

Each horse produced up to 30 pounds of manure per day and a quart of urine. All of this ended up in stables or along the streets. That added up to millions of pounds each day and over 100,000 tons per year (not to mention around 10 million gallons of urine).

By the end of the 19th century, vacant lots around New York City housed manure piles that reached 40 or 60 feet high. It was estimated that in a few decades, every street would have manure piled up to third story levels.

Streets covered by horse manure attracted huge numbers of flies. One estimate claimed that horse manure was the daily hatching ground for three billion disease spreading flies in the United States. In winter, manure mixed with the dirt of unpaved streets to form a detestable, smelly, gooey muck. In summer, the dried and ground-up manure was blown everywhere and the smell was overbearing. When it rained, mini-rivers of manure flooded the streets and sidewalks, often seeping into basements.

Horses also died. Often from overwork in the middle of the street. When they died, their carcasses were often abandoned, creating an additional health issue. In 1880, New York City removed an estimated 15,000 dead horses from its streets. But sometimes a big carcass would simply be left to rot until it had disintegrated enough for someone to pick up the pieces.

Moreover, 19th-century New York was already unsettlingly unsanitary, with whole swathes of the city dominated by “a loathsome train of dependent nuisances” like slaughterhouses, rendering facilities where fat tallow and glue were made, and piles of manure that stretched across entire blocks. 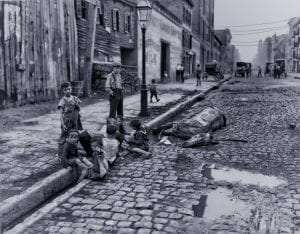 In the late 19th century New Yorkers shared smaller spaces. The human density of New York City rose over the 19th century from just below 40,000 people per square mile to above 90,000. But as we have seen earlier with clean water and waste, Americans were not keen to spend money improving their sanitary situation.

Some cities tried to cover the cost of street cleaning by selling the manure for fertilizer. In 1803 the New York superintendent of scavengers spent about $26,000 for street cleaning and realized over $29,000 from selling the manure collected. Nevertheless, it was soon impossible to absorb the huge production distributed around the city. There was so much that farmers began to charge for taking it away.

The larger and richer cities became, the more horses they needed to function to move and haul ever growing numbers of people and goods. Technological innovation didn’t help – indeed it made things worse. The horse remained essential in urban civilization, even after the development of the steam engine. As the Nation noted in 1872, though great improvements had been made in the development of such “agents of progress” as the railroad, the steamboat, and the telegraph, modern society’s continued to depend the horse. It was the horse who fed the railroads and steamboats with passengers and freight, and who provided transportation within the cities.

The more horses, the more manure. Moreover, all these horses had to be stabled, which used up ever-larger areas of increasingly valuable land. And as the number of horses grew, ever-more land had to be devoted to producing hay to feed them (rather than producing food for people), and this had to be brought into cities and distributed—by horse-drawn vehicles. It seemed that urban civilization was doomed.

In the late 1800s, the city hired drainage engineer George E. Waring Jr., who had worked on Central Park, to start cleaning things up. He pushed for new laws forcing owners to stable horses overnight (instead of leaving them in the streets) and mobilized crews to gather manure and horse corpses to be sold for fertilizer and glue. What they couldn’t sell was dumped. And the City tried harder – sewage infrastructure was improved, and the first streetcar lines appeared (horse-drawn, but able to carry more passengers than a carriage); in addition, public transport was encouraged and street cleaning crews were established. 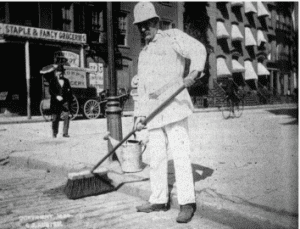 Still, the situation remained so grim that in 1898, Waring organized the first international congress on urban planning. Manure was the main topic. This event, considered among the first environmental summits in history, was attended by representatives from other cities to develop ideas on how to resolve the manure issue. Despite their collective efforts however, participants were unable to solve the problem and the conference planned for 10 days concluded on the third.

By then, things were changing. Electric streetcars were gaining traction. Rising land pricing (for stables and farmland) coupled with higher food costs increasingly made these new options more economical, too. But the rise of private cars was the final nail in the horse-drawn coffin. 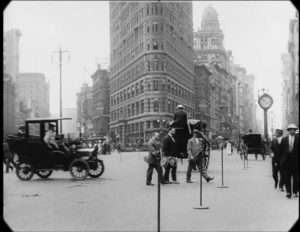 Automobiles were cleaner, quieter and healthier than horses. “The horse in the city is bound to be a menace to a condition of perfect health,” warned one leading urban health authority in 1901. Public health officials charged that windblown dust from ground-up manure damaged eyes and irritated respiratory organs, while the “noise and clatter” of city traffic aggravated nervous diseases. Since, noted Scientific American, the motor vehicle left no litter and was “always noiseless or nearly so,” the exit of the horse would “benefit the public health to an almost incalculable degree.” By 1912, cars outnumbered horses on the streets of NYC and by 1917 the last horse-car was put out of commission and the issue of horse droppings slowly waned.

But progress has a price: Many businesses centered on the horse collapsed and many lost jobs. Not counting those who directly drove or cared for horses, in New York and Brooklyn in 1880, there were 427 blacksmith shops, 249 carriage and wagon enterprises, 262 wheelwright shops, and 290 establishments dealing in saddles and harnesses. Add to this vets and the makers and suppliers of all the goods required in the keeping of horses.

This story was written by Stephen Blank, and is presented here courtesy the Roosevelt Island Historical Society,  founded in 1977 to recover, maintain and disseminate the record of Roosevelt Island’s heritage from colonial times to the present. Visit their website at www.rihs.us.