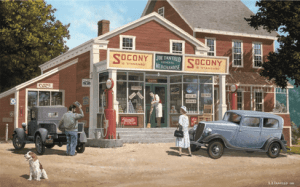 The Albany Institute of History & Art has announced A Sense of Time: The Historical Art of L. F. Tantillo, a new exhibit highlighting the artist’s forty-year career, bringing together a selection of over 90 works of art by one of the most noted painters of historical subjects and marine views of our time.

Artist Len Tantillo is recognized for his ability to capture specific moments and visualize places of the past through his paintings. Having spent his life in the Hudson Valley, most of Tantillo’s work portrays the sites and events that shaped the history of New York State, from pre-European contact Iroquois villages to Dutch settlement and continuing to the development of railroads and the construction of iron bridges across the Hudson River.

As an artist, Tantillo is known for his attention to detail and historical accuracy. A Sense of Time, which features 97 works of art from fifty-three institutions and collectors, will provide insight into his artistic process. Before a painting, Tantillo meticulously researches his subject to ensure the accuracy of the painting’s details and setting. The exhibition pairs some of Tantillo’s works with historical maps, images, and objects that informed and shaped their accuracy. In addition, visitors will be able to see Tantillo’s working models, digitally reconstructed villages and street scenes, and preparatory sketches.

Tantillo selected all of the works in this exhibition and divided them into nine themes: Native Peoples, New Netherland, New Amsterdam, The English Colony, A New Nation, Steam Powers a Nation, Building Interest, Technology and Defense, and En Plein Air. He also wrote accompanying text for each work. 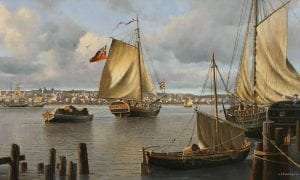 Len Tantillo was born in 1946 in upstate New York and attended the Rhode Island School of Design. From 1969 to 1976 he worked as an architectural designer and acquired a working knowledge of building design and construction. During his apprenticeship the focus of his work shifted to visual presentation and in 1976, Tantillo began working as a free-lance architectural illustrator. In 1980, he was commissioned to depict a series of 19th century structures from archeological artifacts and historic documents. Similar projects followed and in 1984, Tantillo left commercial art and began the full-time pursuit of historical fine art. He has spent the past 40 years creating numerous historical and marine paintings, which have continued to draw a wide audience. His work is in the collection of the Metropolitan Museum of Art, Albany Institute of History & Art, Historic Huguenot Street, Fenimore Art Museum, Excelsior College, and in many other public collections. In 2009, the Westfries Museum, Hoorn, Netherlands exhibited 50 of his works in the exhibition Hollanders and the Hudson: The Paintings of L.F. Tantillo. He is a fellow of the American Society of Marine Artists and the New York Academy of History. Tantillo’s studio is located in southern Rensselaer County in upstate New York.

The Albany Institute of History & Art is located at 125 Washington Avenue in Albany. Free parking is available in the museum’s lot at the corner of Elk and Dove Streets. The exhibition galleries and Museum Shop are open Wednesday through Saturday 10 am to 5 pm and Sunday noon to 5 pm.

Timed tickets are strongly encouraged and may be purchased on the museum’s website. Current admission rates are $10 for adults, $8 for seniors and students with ID, $6 for children aged 6-12, and free for children under 6. Albany Institute members are admitted for free.

Illustrations: The General Store, 1938 by Len Tantillo (1998) acrylic on panel, collection of the artist; and The 1748 Arrival of Governor George Clinton, Len Tantillo, 2016, oil on canvas, Albany Institute of History & Art, gift of Donald and Ann Eberle.