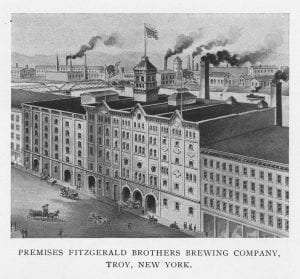 One source lists 34 breweries in Troy at one point. Some only lasted a couple of years, while others endured, even beyond Prohibition. One of the oldest and largest of Troy’s breweries was the Fitzgerald Brewery. 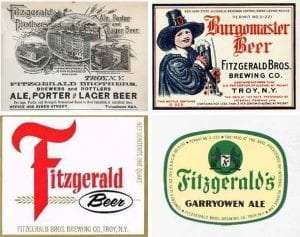 In 1866, Edmund Fitzgerald purchased the Lundy & Ingram brewery on the west side of River Street, which had been founded in 1852. Brothers Michael and John joined in, and in the beginning, they did not brew themselves, but were distributors of various kinds of liqueurs, gins, whiskeys and brandies. Michael dropped out in 1870, leaving Edmund and John to grow the company and move forward. They decided to start brewing their own brand of beer and ale.

Arthur James Weise reported in The City of Troy and Its Vicinity (1886) that the brewery was called the Garryowen Brewery, but the beer and ale were always called Fitzgerald’s. The malt house and brewery were separate brick buildings, six stories tall, stretching back to the Hudson River. They were built in 1877 and 1881, respectively. Further down the street, the two-story office building stood surrounded by other wings and buildings associated with the company, bringing the total to nine buildings, from 195 to 511 River Street. 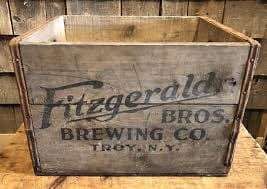 Weise goes on to say that the company was producing 70,000 barrels of ale and porter annually, and employed seventy men. John Fitzgerald died in 1885, passing his interests to his heirs, who continued to grow the company, which became Fitzgerald Brothers Brewing Company in 1899. The company expanded by building a large new bottling plant across the street, at 494-500 River Street.

At the turn of the 20th century, Troy had nine operating breweries. Like every brewery in the nation, Fitzgerald’s was closed down in 1920 by the enactment of the Volstead Act, which instituted national Prohibition. It lasted 13 years. In New York during that time many breweries survived, just barely, by producing a low-alcohol “near beer.” Some also switched to manufacturing and bottling lemonade and soft drinks. 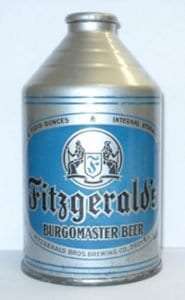 Fitzgerald’s also manufactured its own malt. The barley used in making beer is also a food ingredient. Former breweries produced malt fore their beer, which involved soaking the grain, allowing it to germinate, then drying and powdering it for commercial use during Prohibition.

Malt allowed Fitzgerald’s to survive, but they did so with a vastly reduced work force, and limited use of their huge facility. In 1932 just before Prohibition’s end, The Saratogan reported that they had only 12 men working at the plant. William Fitzgerald was eager to dust off the equipment and restart production of beer.

The company did go back into production, and was soon making their popular beer and ale. Many bottle, trays and advertising ephemera survive from the various periods of Fitzgerald’s popularity. But the end of Troy’s beer boom days was near. Some of the city’s breweries never truly recovered from Prohibition, which was followed by the Great Depression. Some fell victim to Troy’s recurring menace – fire. 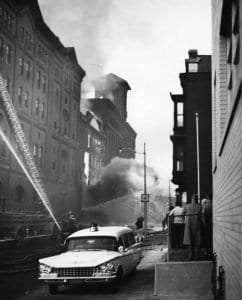 On November 2nd, 1964, a fire broke out in the main brewery house. It soon became a major conflagration. When it was over, the river side of the complex was highly damaged. The bottling plant was untouched.

Fitzgerald’s had already moved much of their operation to Glens Falls in 1960, when they purchased a Pepsi Bottling plant there. They were transitioning from brewers to distributors, and the fire was the death knell to Troy beer brewing. In 1963, they sold the label and the machinery to the Drewry Company, but not the building. So, after the fire, the city decided that the plant was too damaged to be allowed to stand, and it was torn down the following year.

The large empty lot became home to Hedley Cadillac-Oldsmobile in 1966. After that business closed, the lot remained parking until it became the site of Troy’s new Courtyard by Marriot Hotel, which opened in 2018. 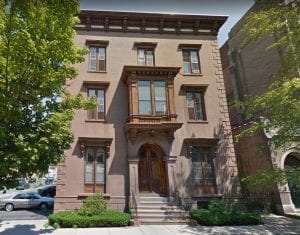 The bottling equipment was dismantled from the remaining plant across the street, and that building was sold as well. For several years, it was a warehouse for Troy’s Nelick’s Furniture company.

That building has been a self-storage warehouse for many years, and is owned by First Columbia, which recently announced plans to adapt the building as a state-of-the-art high security, climate controlled, “Class A” self-storage facility. This news has once again propelled Fitzgerald Brothers back into the news.