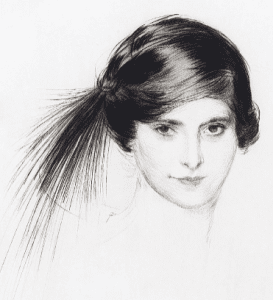 Chaja Rubinstein was born in December 1872 in a Krakow ghetto, the eldest of eight girls. Having escaped from an arranged Orthodox Jewish marriage, she would become a dominant personality in business circles in London, Paris, and New York. 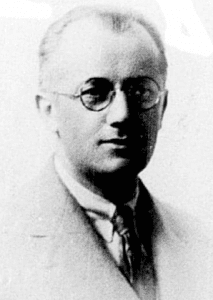 Before their divorce, she bankrolled her Polish-born husband Edward William Titus in the running of a bookstore and publishing house in Montmartre, Paris. Whereas she revolutionized skin and body care by laying the foundation of the modern cosmetics industry, Titus made a decisive intervention in the long-running battle between the writer/publisher and the censor.

In 1896, having clashed with her parents, Chaja adopted the name Helena and sailed to Australia to live with her uncle Louis Silberfeld, a storekeeper at Coleraine in western Victoria. She carried with her pots of a face cream created by a Hungarian chemist in Krakow.

Women at the time cleansed their skin with soap as creams were suspect. Makeup was associated with actresses and loose women. However, female farmers who suffered from sun-damaged skin admired Helena’s porcelain complexion. She began advising them on skin care. In 1900 she moved to Toowoomba to study herbal sciences, acquiring the skills to recreate her precious cream, jars of which she sold on the street.

By 1902 she had saved enough money to open her first beauty institute in Elizabeth Street, Melbourne. Her timing was perfect as females were starting to gain a voice in a patriarchal society. That same year Australian women won the vote.

Having launched her Crème Valaze (Hungarian for “gift from heaven”), business took off. Such were the sales of her product that she was able to move upmarket and open a salon at 243 Collins Street. The Australian success story allowed her to travel to Europe, consulting dermatologists in Berlin, London, and Paris.

In 1908 Helena settled in London and within a year she opened Maison de Beauté Valaze at 24 Grafton Street, Mayfair (once home to Robert Cecil, Marquess of Salisbury – twice Britain’s Prime Minister). Developing her business and driven by ambition, Rubinstein had put her personal life on hold – until she met Edward William Titus some time before she moved to London.

Edward joined her in London and proposed. She was thirty-eight when they married in a private civil ceremony at the Register Office, Strand, on July 28th, 1908. In 1912, after the birth of their second son, they moved to Paris, where Helena opened a boutique and a laboratory-turned-factory, sparking the beginning of the industrialization of cosmetics.

Born Arthur Ameisen in Krakow in July 1870, Titus had settled in Pittsburgh in 1891 and became an American citizen three years later. In 1904/5, he moved to Melbourne where he pursued a career in journalism. Because of anti-Semitic challenges, he changed his name. Having met compatriot Helena Rubenstein, she employed him as her marketing and publicity manager. Titus devised eye-catching adverts for her salon. He helped building up her public image; she fell in love with him.

Once the family had settled in Paris, Titus built a network of connections in European circles of modern art and literature. He introduced her to Jean Cocteau (who invented Helena’s nickname Empress of Beauty), Colette, Man Ray, Marc Chagall, and many other prominent avant-garde artists. But war intervened. The family fled Paris and settled in New York. They moved first to West End Avenue on Manhattan’s Upper West Side, and then one block west to Riverside Drive.

Helena soon opened a salon at 8 East 49th Street and expanded her operations to San Francisco and Philadelphia, followed by premises in Boston, Washington, Chicago, and Toronto. She also permitted selected department stores to stock her products. Rubinstein created a sweet smell of success. 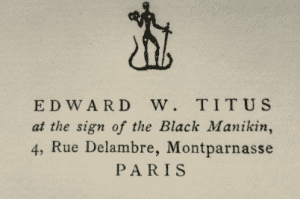 After the war Rubinstein and Titus returned to Paris. Although their relationship had become strained because of his infidelities and her obsession with work, she bankrolled his new career as a bookseller and publisher.

In 1924 he opened a bookshop named At the Sign of the Black Manikin at 4 Rue Delarme in Montparnasse, close to the Café du Dome which was renowned as an intellectual gathering place and widely known as an Anglo-American expat café. He stocked the shop with current American and English publications, limited editions, and rare books.

Titus also founded the Black Manikin Press. He published Baudelaire’s Prose Poems (1926) translated by Aleister Crowley; and Kiki’s Memoirs (1930) featuring an introduction by Hemingway and photographs by Man Ray. In 1929, Titus became editor of the magazine This Quarter. Its 1932 issue was devoted to Surrealism and guest edited by André Breton.

In 1928, Helena took the decision to sell her business empire to Lehman Brothers only to buy it back one year later in the midst of Depression. She made a profit of $6 million on the deal. With enormous wealth at her disposal, she built one of the world’s biggest collections of modern art. Encouraged and advised by the Jacob Epstein, she brought together a notable collection of African sculpture.

Rubinstein commissioned artists to decorate her salons. Her portrait was painted by Raoul Dufy and Salvador Dali (amongst others); photographer Man Ray took pictures of her. She liked to display new acquisitions to her clients.

In the meantime, Edward Titus was presented with a publication opportunity that would challenge and, eventually, undermine censorship in both Britain and the United States.

Our Lady of Paris 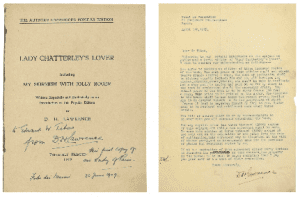 In a letter of December 18th, 1927, D.H. Lawrence predicted that his new novel was so shocking “from the smut-hunting point of view, that no publisher would even dare have the MS [manuscript] in his office.” He was correct. The first edition of Lady Chatterley’s Lover was privately printed in Florence by the bookseller Giuseppe “Pino” Orioli in an edition of 1,000 copies (with various typographical errors: none of the type-setters spoke English).

Distribution in England was organized by Charles “Carl” Lahr, a political refugee from Germany’s Rhineland who, in 1921, had opened the Progressive Bookshop at 68 Red Lion Street, Holborn. He took the risk of selling a novel that had been banned in Britain and America. Dispatch proved difficult and copies of the novel were scarce. The vacuum was filled with pirate editions.

Lawrence desired a cheap edition of Lady Chatterley to undercut the illicit trade, but no publisher was willing to brave the censor. Victor Gollancz would only consider an expurgated manuscript. Lawrence refused. He finally succeeded in finding a wider audience when, in May 1929, Titus agreed to take on “Our Lady” and publish a paper-bound edition of the novel with a Paris imprint. In London, Lahr continued as its clandestine distributor. By March 1930 D.H. Lawrence was dead.

The Obscene Publications Act was passed in 1959 with the intention of strengthening the law on hard-core material. The first test of the new Act was the Lady Chatterley trial. The prosecution failed. A less repressive regime was imminent. A mature society would no longer accept random censorship by the authorities.

Following the court case, Penguin won the right to publish the novel in its entirety in October 1960. A run of 200,000 copies was sold out on the first day of publication. 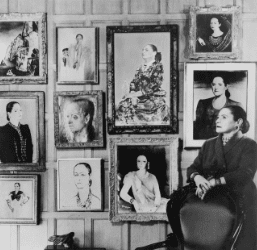 During the first decades of the twentieth century, the histories of modernism, feminism, and cosmetics ran parallel. The period coincided with the time that Helena and Edward spent together (from 1908 to 1937). Both contributed to the spirit of avant-garde enterprise that typified the era.

Never profitable, the Black Manikin Press was short-lived and ended in 1932. As a publisher, Titus had a total of twenty-five books to his name. Five years later, his marriage ended in divorce. Little is known of his activities after closure of the bookshop.

Helena continued in business and fought bitter battles with her rivals Florence Nightingale Graham (Elizabeth Arden) and Charles Revson, the founder of Revlon. In 1935, she met Prince Artchil Gourielli-Tchkonia, a Georgian emigré some twenty years her junior. They married in 1938 and shared their time between New York and Paris. 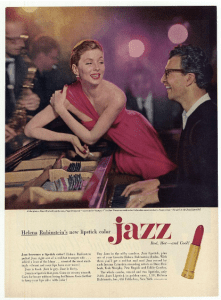 Commercial lipstick had hit Paris in the 1880s. Wearing lipstick would become a symbol of feminist rebellion and an act of defiance. When James Bruce Mason, Jr. patented the swivel-up lipstick in the United States in 1923, the habit took off and the industry blossomed. Helena Rubenstein claimed her share of this lucrative side of the business.

In late 1954, she launched a campaign to promote a lipstick called Red Hot and Cool. The name was chosen by Dave Brubeck for a live album recorded during performances at New York’s Basin Street East Club. Richard Avedon’s cover photograph was produced in partnership with Rubenstein and shows the model Suzy Parker leaning on the piano at which Brubeck is seated. Collaboration with Brubeck was a reminder of Helena’s modernist past. Alternatively, one could argue that avant-garde “wildness” had been neutralized in a cosmetic (all white) setting of commercial advertising.

Illustrations, from above: Helena Rubinstein, 1908 by Paul César Helleu; Edward William Titus, about 1921; sign of the Black Manikin; D.H. Lawrence, Lady Chatterley’s Lover including My Skirmish with Jolly Roger, author’s unabridged popular edition. [Paris]: privately printed, 1929. (Inscribed on the title: To Edward W. Titus ‘this first copy of our Lady of Paris’, June 26th 1929; Helena with some of the portraits she commissioned courtesy Helena Rubinstein Foundation Archive; and Dave Brubeck and Rubenstein’s new lipstick in 1954.