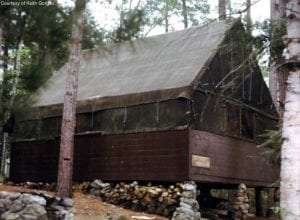 Many years ago I paddled past what appeared to be many rather unnatural clearings on Long Pond in the St. Regis Canoe Area. Here and there, partially underwater, I saw a piece of water pipe or an old rusty dock support. They are the remains of tent platform sites.

There were about 600-700 private leases of Forest Preserve lands throughout the Adirondacks in the early 1970s. There were many on Lower Saranac Lake, where there were 187 tent platforms leased in 1961, and on the various ponds that today comprise the St. Regis Canoe Area. There were also tent platform sites on such popular lakes as Forked, Seventh, Lewey, and Indian Lake, along the Raquette River, and in many other areas.

The average size of a platform was 16’x20′ or 320 sq feet. However, there were some sites which had more than one platform. All refuse or trash was to be buried or transported off site (a regulation that was frequently ignored). Gasoline-powered generators were not allowed (this was also often ignored) and the site could not be sold or rented to another party (also frequently ignored). Each lease was to be renewed on a yearly basis. Failure to renew could result in the site being offered to another applicant. 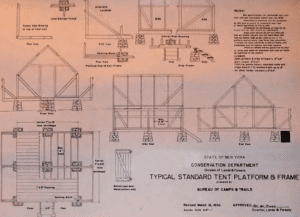 Early in the 20th century, NYS Conservation Department Commissioner George Pratt (1915-1921) wanted to increase recreational opportunities. He introduced the first lean-tos, a trail marking and mapping system, and developed the first public campgrounds (among them Sacandaga, Sharp Bridge, and at Cascade Lake). He also developed the tent platform leasing system allowing individuals to construct a standardized wooden platform with wooden sides, covered with canvas. In its first year (1916) there were 120 permits for tent platforms issued. Over the years the leasing program gradually grew.

During the 1960s the Adirondack Forest Preserve experienced a significant growth in outdoor recreation. More people were camping, hiking and canoeing. Many campers complained that the “prime” spots were already taken “permanently” by tent platform leases. The biggest complaint was that the tent platform permitting system “was a special and exclusive privilege that constituted a ‘holding’ on State lands.”

In June 1971, the New York State Legislature created the Adirondack Park Agency (APA). Among its many recommendations would be the present land-use categories of Wilderness, Wild Forest, Canoe, and Primitive, phased in by 1975. These new areas abolished “non-conforming uses” and with the new regulations, tent platforms had to go.

Some of the leaseholders had held their sites for over 75 years and there was considerable consternation among platform leasees. The Tent Platform Association was created and meetings were held at the Saranac Lake Fish and Game Club (notably where early support for the opening of Forest Preserve land to snowmobiles had also been organized).

The Tent Platform Association (membership of over 100) was politically active. They lobbied the APA, the Department of Environmental Conservation, and local and state politicians. The Association argued tent platform leasees were valuable land and water stewards and they offered to increase their annual permit fee to $100. Then DEC Commissioner Ogden Reid, with backing of the APA, held that tent platform permits would not be renewed beyond December 31, 1975. They advised lessees or sub-leaseholders should make arrangements to remove all personal property and the platform from the sites by that date. 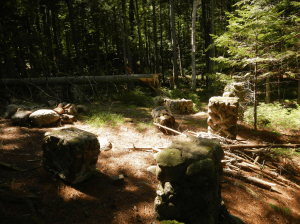 One of the last of the tent platform camps on Lower Saranac Lake was vacated in 1978. Many former permit holders had held out, appealing to the APA, the Governor, their legislators, and engaging in just plain hope. Several permit holders just walked away from their sites. There the task of clean-up was left to DEC work crews, volunteers, and prison inmate crews. Wood framing and decking and other combustibles, were often taken onto the ice and burned. Metal such as stoves, sinks, beds, propane tanks, and more were sledded out by snowmobile. Most concrete piers were broken-up and the concrete and stone was scattered about or used for fire rings.

Many former tent-platform sites became primitive campsites. A few years ago remnants of these former platforms were still evident on Long Pond in the form of concrete fire hearths, pieces of plastic water pipe and metal dock supports. On Polliwog Pond there are still some concrete steps hidden in the woods. On Forked Lake there remain concrete piers where a tent platform once stood. If you know where to look.

Group sizes are now limited on Forest Preserve lands, and the maximum stay is three nights. It is still possible to obtain a “temporary revocable permit” through a local Forest Ranger for larger groups and extended stays, up to 14 days. These are usually granted to hunters, during times of non-peak usage in remote areas.