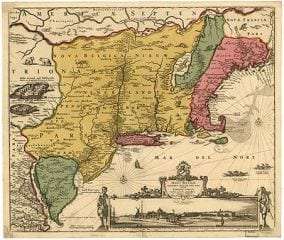 Janny Venema is the former Associate Director of the New Netherland Research Center (NNRC) at the New York State Library and Project Associate at the New Netherland Project, which is responsible for translating the official records of the Dutch colony and promoting awareness of the Dutch role in American history. She is the author of a number of books, including: Beverwijck: A Dutch Village on the American Frontier, 1652-1664 and Kiliaen van Rensselaer (1586-1643): Designing a New World (2011), the first full-length biography of the founding director of the Dutch West India Company. SUNY Press and the Dutch publisher Verloren jointly published them.

Charles Gehring is the Director of the New Netherland Research Center (NNRC). After completing his undergraduate and graduate studies at Virginia Military Institute and West Virginia University he continued with post graduate work at Albert-Ludwigs-Universität in Freiburg, Germany. There he began his study of the Dutch language and first realized that his future research lay much closer to home. He eventually received a Ph.D. in Germanic Linguistics from Indiana University with a concentration in Netherlandic Studies. His dissertation (1973) was a linguistic investigation of the survival of the Dutch language in colonial New York. The NNRC, part of the New York State Office of Cultural Education, is responsible for translating the official records of the Dutch colony and promoting awareness of the Dutch role in American history. He has been a fellow of the Holland Society of New York since 1979.

Thomas J. Ruller has held the position of New York State Archivist since 2015. He has been an active professional and is the author of several peer-reviewed journal articles and reviews on the use of technology in Archives and the preservation of records in electronic form. He has been a consultant for several State governments and other organizations focusing on electronic records management and preservation.

For more information or to register, click here, or email aptrust@nysed.gov.

The entire collection of nearly 13,000 records from New Netherland can be accessed on the State Archives website.