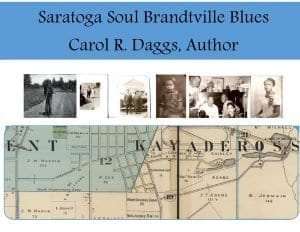 The Saratoga Springs Preservation Foundation is set to host local author, educator, and musician Carol Daggs, who will speak about her family’s over 120-year history as Saratogians featured in her recent novel Saratoga Soul Brandtville Blues on Tuesday, February 23rd.

This area was also known as the Gaslands for its high carbon dioxide levels from the mineral springs. Many residents of this area found employment in the grand hotels, restaurants, or at the racecourse. Carol focuses her narrative on her family’s rich farming history of this neighborhood and their subsequent story as the area changed over the decades.

Daggs has also been featured as a contributing author to the 2017 anthology Before They Were Our Mothers: Voices of Women Born Before Rosie Started Riveting featuring fifteen New York State women authors and edited by Patricia Nugent. In addition, she is an accomplished pianist and vocalist who has played at the famed Apollo Theater.

This program will begin at 7 pm, and will be held on Zoom and Facebook Live. This program is open to the public for a suggested contribution of $10 and pre-registration is required to attend on Zoom. For additional information or to register for the virtual program visit Saratoga Springs Preservation Foundation’s website, or call (518) 587-5030.