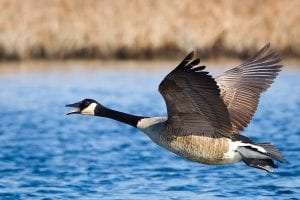 Atlantic Population (AP) Canada geese nest throughout northern Quebec and winter from New England to South Carolina. The largest concentrations of AP geese occur on the Delmarva Peninsula (Delaware and the eastern shores of Maryland & Virginia).

Biologists in the Atlantic Flyway divide harvest zones based on the population that is most frequently harvested in an area. Although the zone boundaries may appear to be arbitrary, they were developed using information from hunter band recoveries, neck collar studies, and satellite telemetry. The goal of zoning is to provide maximum opportunity in areas that mostly harvest resident population Canada geese (i.e. the birds that nest in Southern Canada and Northeast US states) while protecting the more vulnerable populations of migratory geese.

New York is located in the heart of the Atlantic Flyway and thus serves as a major migration corridor for AP geese. These geese are a significant proportion of those hunters take throughout upstate New York, especially in the Finger Lakes, Lake Ontario, St. Lawrence River, Lake Champlain, and the Hudson River Valley regions. Season length and daily bag limits are more restrictive in these areas to protect migrating birds. While our local Canada geese are productive and have a high survival rate, the migratory Canada geese (that look nearly identical) are not so lucky. They take longer to sexually mature, have smaller clutch sizes, and lower survival. In some years, their breeding habitat isn’t thawed until late June. In those years, productivity can be near zero, as was the experience in 2018. Based on weather data, productivity in 2020 was also very low.

The population of AP geese has fluctuated from as few as 35,000 pairs in the early to mid-1990s to over 200,000 during the 2000s. As a result of the low population in the 1990s, the hunting season was closed for a number of years while the population recovered. By 2002, the population had rebounded to ~180,000 breeding pairs and remained near that level until 2016. From 2010-2019 we have experienced a number of below average productivity years compounded by increased harvest. The combination of poor productivity and increasing harvest caused a precipitous decline in the population from 2016 (192,000 pairs) to 2018 (112,000 pairs). If weather conditions would have resulted in average to above average productivity, we may not have experienced such a decline, however managers need to be responsive to protect the resource.

In an effort to avoid closed seasons, the Atlantic Flyway Council and the USFWS recommended dropping down to a restrictive package of 30 day seasons with a two bird bag limit in northern states and a 30 day season and one bird bag limit in southern terminus states in 2019. Historically, to maintain equal opportunity to harvest AP geese, northern states were afforded slightly more liberal season structures than the Delmarva region. However, during the first year of the restrictive seasons (2019-2020), the distribution of takes from hunting shifted from being predominantly occurring in the Delmarva, to more birds being harvested in northern states for the first time and the kill rate (about five percent in 2019) exceeded what is predicted to be necessary for the population to rebound (which is three percent).

Due to excessive harvest rate and shift in harvest distribution, the Atlantic Flyway Council recommended that when seasons are restrictive, all states should have the same regulations to allow populations to rebound as quickly as possible. Therefore, the regular Canada goose season in New York State will be reduced to a 30-day season with a daily bag limit of one in the West Central, East Central, Northeast, Lake Champlain, and Hudson Valley zones. Harvest restrictions have also been made in Quebec and Ontario. It’s hoped the reduction in hunting will allow the population to rebound and shorten the amount of time the restrictions are necessary.