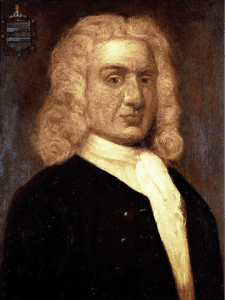 Over the past few years piracy has reappeared with various attacks in the shipping lanes off the East African coast. In early modern history it was a major threat to seafaring nations. The first recorded executions in legal history were those of pirates. In London and New York the final public hangings before abolition of the practice were also of pirates.

The first principles of international law were formulated with piracy in mind. Once supranational agreements seemed to have secured safety at sea, the terror of piracy was quickly forgotten. The pirate became a literary figure and, eventually, a blockbuster hero. By adding a spoonful of fantasy to historical fact, literature created the stereotype of a lovable rum-swilling rogue that not only obscures the ugly realities of piracy, but also seems to obstruct proper research into the subject. 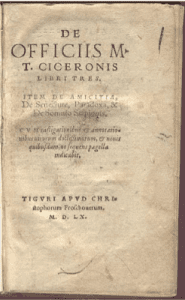 Maritime marauding has a long history. In 44 BC, Roman lawmaker Cicero published De Officiis (On Duties) in which he condemned piracy as a crime against civilization. The passage was rephrased by the medieval English jurist Edward Coke as “hostis humani generi” – pirates are the “common enemies of mankind.” They are beyond legal protection. Piracy was the first case of universal jurisdiction.

Barbary piracy gained significance during the sixteenth century when Muslim ships, operating from the coast of North Africa, attacked European merchant vessels. Between 1609 and 1616, England alone lost 466 merchant ships to pirates. The same men spread terror in seaside villages where they carried out raids (“razzias”) enslaving over a million Christians.

As piratical acts occur outside a state’s sovereign territory, legal provisions were difficult to impose. In the absence of supranational arrangements, pirates sailed free without repercussions. The drive to formulate an international legal framework was set in motion by piracy. With the emergence of colonialism, safeguarding trade routes for the transport of valuable cargo provided an urgent reason to combat the threat. If individual pirates were caught, lawmakers showed no mercy towards them. 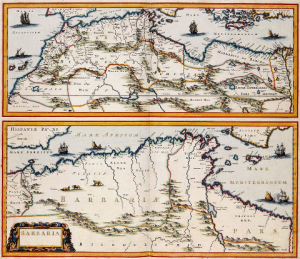 The sentence of being hanged, drawn, and quartered was introduced in 1241 in England specifically for the execution of William Maurice who had been convicted of piracy. Although this method of torture was not abolished until 1870, the punishment for piracy was changed to death by hanging (known as “dancing the hempen jig”), but the thirst for retribution went further than that. Dead bodies were left to swing until the flesh rotted off them. Why this severity of treatment?

With the increase of international trade, piracy became an economic obstacle. In his Canterbury Tales Chaucer had already called for protection by creating a “sea police.” At the same time, piracy was a state-sponsored undertaking. Privateers carrying governmental “letters of marque” were authorized to plunder enemy ships for a share of profits. Inevitably, they went beyond their legalized missions and attacked vessels at will. 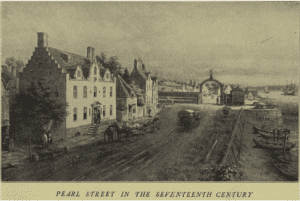 Under English rule, New York was a “Pirate Utopia” where ships were allowed to unload and sell stolen treasures. Away from the supervision of the Crown and run by corrupt officials, local merchants were able to deal with seafaring criminals without fear of arrest. Piracy was a crucial practice in New York’s competition with the emerging ports of Boston and Philadelphia.

Two-faced Benjamin Fletcher was appointed Governor of New York in 1692. He made Anglicanism the state religion, but also forged relationships with Atlantic pirates. He granted privateering commissions to harass French vessels, taking a portion of the booty in exchange for his cooperation. During his seven year rule, he handed out at least sixteen such contracts. The Governor also allowed William Kidd to operate from New York.

Born in 1645 in Greenock, Scotland, William Kidd had acted as a privateer for many years. He settled in New York after marrying the twice widowed Sarah Rouseby in May 1691. Kidd struck it rich. His wealthy wife held a portfolio of properties at Wall Street, Pearl Street, Water Street, and Pine Street. The couple’s main residence was at 119/21 Pearl Street.

For a number of years William played the role of an urban gentleman with an elegant wife, two daughters, and a circle of prominent friends. But not for long – by 1695 the Captain had obtained a new privateer’s license and taken to sea again. 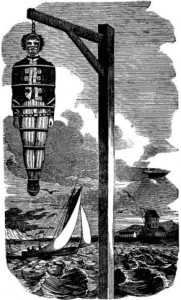 In service of the English government, Kidd overpowered the Quedagh Merchant on January 30th, 1698. The ship was loaded with East Indian merchandise and silk. Although captained by an Englishman, the vessel sailed under protection of the French government which gave legality to Kidd’s action.

On return, however, the East India Company accused him of piracy. Since English law did not allow pirates to be tried in the colonies, William Kidd was transported back to London and spent his final months in Newgate Prison, pleading his innocence and defying requests to repent. He even attempted to bribe officials with stories of a £100,000 treasure buried away.

From prison Kidd was driven to Execution Dock in Wapping in a procession led by the Admiralty Marshal who carried a silver oar representing his department’s jurisdiction over crimes at sea. In front of a large crowd, he was executed (twice – the rope broke on the first attempt) on May 23rd, 1701. Covered with tar, his body was placed in a gibbet along the Thames as a warning to fellow sailors that piracy would not be tolerated.

London’s Execution Dock was used by the Admiralty for over four hundred years to punish pirates. The final hangings there took place in December 1830 when George Davis and William Watts, both charged with piracy, died at the hands of the hangman.

In New York, the last public execution took place on Bedloe’s Island in July 1860. A crowd of 12,000 turned out to witness the hanging of Albert Hicks who had been tried for piracy by the Federal Government although New York State had abolished public executions long before that. The seriousness of the crime overruled all objections. 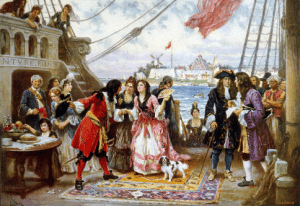 Rogue literature deals with villains and criminal activities. Pamphlets of that nature came into fashion during the mid-sixteenth century. Sold unbound, these were peddled cheaply at fairs and in taverns. Crime stories were early “bestsellers” in the history of printing.

Before long writers emerged with the ability to exploit that fascination. In 1566, Thomas Harman published A Caveat or Warning for Common Cursitors, Vulgarly Called Vagabonds which contained tales of vagrancy and a canting dictionary. The impact of the book determined harsh legislation against vagrants. Measures imposed to restrict the presence of “wanderers” were transposed into American law during the colonial era.

Pirate tales started circulating somewhat later. From the 1700s onward songs, plays, and novels were written about seaborne crime. Within hours of William Kidd’s execution, ballad writers were turning out songs. The rumor that he had buried a “secret” treasure contributed to the spread of the legend.

In 1724 A General History of the Robberies and Murders of the Most Notorious Pyrates was published under the name Captain Charles Johnson (his identity remains a topic of speculation). Here too fact and fantasy interact freely. During the nineteenth century, fictionalization of pirate characters was pushed further. Lord Byron’s The Corsair (1814) became wildly popular. It created the myth of the pirate as a heroic individualist. Seven years later, Walter Scott replied with his novel The Pirate. Robert Louis Stevenson’s image of Long John Silver as a swashbuckling adventurer set a fictional trend which, to this day, served as a template (epitomized by the Pirates of the Caribbean movies).

The premiere of the Pirates of Penzance took place at New York’s Fifth Avenue Theater on December 31st, 1879. In their comic opera Gilbert and Sullivan reduced pirates to a band of fun figures. Torture and murder were airbrushed out of the narrative. Hollywood was presented with an oven-ready formula. 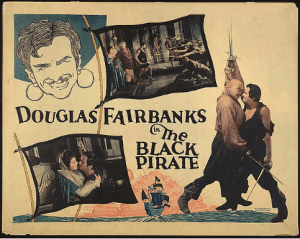 Why were so many writers inclined to romanticize piratical acts of ruthless violence? Why did (and does) criminal behavior inspire so many art works and films?

An often repeated, Byron-inspired reply to that question points at our ambiguous relationship to the rise of the bureaucratic state. As social life became more regulated and confined, the pirate’s ‘untrammeled’ freedom presented itself as an alluring image. There is limited value in this argument as criminal bravado was a literary topic long before Lord Byron introduced his colorful corsair.

The identification-argument goes deeper. In a context of criminality, social rules are torn and the moral code is violated. Creativity too is about pushing limits and overstepping boundaries. For that reason society has labelled the artist a rebel, a desperado, an outcast. Over time, numerous creative individuals have been branded immoral and taken to court. Artist and pirate share deviant behavior.

Be that what it may, the fanciful projection of piratical activity stands in the way of a historical scrutiny that the subject demands. At present, slavery is a topic of renewed interest. The issue of piracy and its interaction with the slave trade should be researched. Instead, we discuss the escapades of Johnny Depp.