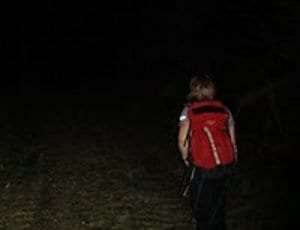 With plenty of snow on the ground and a full moon on Saturday, this weekend promises to be one of those occasions when enough natural light will exist to venture outside and explore the nocturnal side of nature.

Taking a night time stroll can be quite exciting, especially during the latter part of February, as this is the time of year when the yelps and howls of the coyote, that signals the onset of its mating season, can often be heard. Likewise, both the red and gray fox will soon be entering their breeding periods, and their vocalizations may also break the stillness of the night.

For anyone with an active imagination, hearing wildlife sounds echoing from the shadows can be quite unsettling, but the skunk is the only animal you might encounter that could pose a problem to a nocturnal traveler.

Among the various mammals that become dormant for the winter, the skunk is the one with the shortest period of inactivity. This relatively docile weasel typically enter its den a week or two after Thanksgiving, and then rouses from its sleep as soon as the first substantial thaw occurs in February. The warm weather is enough to entice this black and white critter to temporarily leave the confines of its burrow and begin to wander for short distances around the semi-open sections of forests in which it strongly prefers to reside.

Even though the skunk has been dormant, its body still continued to produce the evil-smelling chemical that serves as its best defense against intruders. The glands that secrete and store this amber colored fluid are small, holding an equivalent of several teaspoons. So, when a skunk exits its den during the latter part of winter, it has more than an ample supply of this substance to spray any thing that it might deem a threat to its well being.

During the warmer months of the year, the skunk uses its musk sparingly. It takes several days for a skunk’s body to replenish what is discharged in discouraging the advances of an unwelcome intruder, and repeated bursts can quickly exhaust its reserves.

However, on those nights when it leaves its den in late February and during March, the skunk is never hesitant to spray this fluid in the vicinity of a potential threat. In this way, the skunk attempts to quickly re-educate the nocturnal wildlife residents of its surroundings, and any neighborhood dog, that it is serious about being left alone as it wanders through the area.

Since the black and white pattern on the skunk’s back closely matches the background of snow and shadows in a wooded setting, it is never easy to spot one of these animals when out for a walk at night. An encounter with a skunk, especially if you have a pet accompanying you, may prove that there is one mammal that can transform a peaceful outing into a most unpleasant experience.

(Note: Regardless of how bright it is under a full or nearly full Moon, it’s always a good idea to bring a flashlight.)