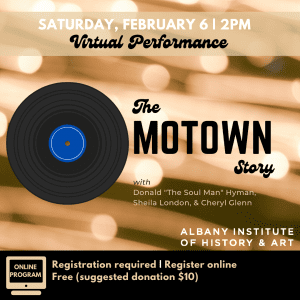 The programs are offered free, with a suggested donation of $10. Registration is required for both events and can be completed online. The programs will be offered live via Zoom with a Q&A session.

“The Motown Story,” a virtual performance and Q&A session, is set for Saturday, February 6th at 2 pm. This event will feature a performance previously recorded at Hudson Valley Community College featuring Donald “The Soul Man” Hyman, with Sheila London and Cheryl Glenn for an afternoon of classic Motown Hits. A Q&A session with Donald Hyman will follow the performance.

“Black Swan Records & Motown Records: African American Independent Music Companies” is a virtual presentation set for Saturday, February 13th, at 2 pm. In this virtual presentation, Donald “The Soul Man” Hyman will look at two African American independent music companies that changed the music scene for Black performers. During the Harlem Renaissance, Harry Pace Jr. started Black Swan Records whose impact on the music industry opened the door for Black performers. During the Civil Rights movement in the 1960’s, Motown Records started by Berry Gordy would dominate the popular music industry and the Top 40 charts with groups like the Supremes who have twelve number one records.

Donald Hyman is a Brooklynite who now calls Albany home. He has a BS from the St. Francis college, an MA in Urban Studies and MS in Secondary Education from Long Island University. He is currently Vice-Chairman for Channel Albany and has produced “Albany Temp Spectrum” for eight seasons. He currently works at Montessori Magnet School in Albany. He was a professor in the American Studies Department at the College of St. Rose for six years. Hyman has performed in venues throughout the Capital Region including MLK Celebration Saratoga, Proctors, The Palace, The Eden Cafe Juneteenth, Schuyler Mansion, SLOC, Albany Civic Theater, Tang Museum, Skidmore College, and Siena College Opalka Gallery. He has acted with Black Theater Troupe of Upstate NY, Soul Rebel Performance Troupe, Ira Aldridge Theater Ensemble, Essence of Acting and First Israel Male Choir. Human has performed in Fences, Lesson Before Dying, Camp Logan, The Exonerated, Of Mice and Men, The Full Monty, and can be seen in the History Channel series The Revolution.