As a result of bigoted attacks by his political enemies being carried forward by later writers like Herbert Asbury in Gangs of New York (1928), he’s been falsely accused of being in criminal league with Tammany Hall, for leading “the dead rabbits gang,” and for being involved in the killing of the nativist William “Bill the Butcher” Poole.

Morrissey spent his childhood in Troy, Rensselaer County, NY, where he began boxing – at that time and throughout his career the sport was bare-knuckle.  He spent a few years working in various capacities on the docks of New York and Troy and fought several noted “rough and tumble” fighters in Troy, Albany, and New York. It was in one of these fights where he earned the nickname “Old Smoke,” after falling into a stove and catching his coat on fire.

Failing to get a fight with Tom Hyer, the New York nativist who was then the heavyweight champion, Morrissey followed him to California during the Gold Rush of 1849. The much older Hyer returned quickly to New York. Morrissey instead won his first fight in a boxing ring with George Thompson, the boxing veteran who had trained Hyer.  Waiting in the wings was John “The Benecia Boy” Heenan, a blacksmith from West Troy (now Watervliet), then living in Benecia, California.

Morrissey returned to New York with a large purse and, like most leading boxing contenders, established himself in the saloon culture of the city as “a sporting man.” He operated gambling tables with partners, trotted his own horses, and took bets on elections, horse races, and other sporting events around the city of New York. 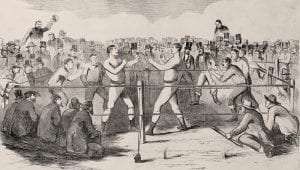 In 1853, he won the bare-knuckle boxing heavyweight championship by beating James Ambrose, known as “Yankee Sullivan,” in what is now Columbia County.  He defended his title in 1858 against John Heenan in the most widely reported sporting event in America up until that time.  This fight made John Morrissey the most well-known sports figure in the world.

His political career began in opposition to Tammany ward bosses in the Fifth Ward of New York in the mid-1850s. While there were lots of political and ethnic alliances that drew men together in sometimes large street battles against their opponents, there are no contemporary accounts of John Morrissey taking part in any of these.

Herbert Asbury, and nearly all writers following him, make the claim that Morrissey was a member, or even leader, of a street gang – the so-called Dead Rabbits. Modern conceptions of the Dead Rabbits Riot of 1857 as a fight between two gangs, the Dead Rabbits and Bowery B’hoys, or as some kind of city-wide gang war, are not based on primary sources, but on an exaggerated and sensationalist preoccupation with “gangsters” in popular culture.


Most notably, Bowery B’hoys were not a gang, they were a cultural milieu of mostly young men (but also some women), who inspired and reflected the Mose the Fireboy character in an 1848 play. Other “gangs” identified as part of the riot were in fact part of the city’s popular citizens militias. These were sometimes called excursion companies, or rifle companies, after their regular target shooting excursions. 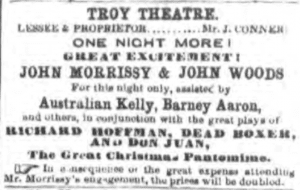 Contemporary reports suggest the Dead Rabbits did not exist either.  Tyler Anbinder, a respected modern historian who wrote the book Five Points, makes the same assessment, and offers the following as one example of several proofs he provides: “The Morning Express… initially reported that mourners at one rioter’s funeral wore satin badges inscribed with the words “Dead Rabbit Club,” but the next day admitted that they had actually read ‘Roach Guard. We mourn our loss.’ ”

The Roach Guard, who probably was involved in the riot that day in 1857, was a militia company of the type common in the period lead by Democratic Common Council Member Walter Roche, who was also a school commissioner who served on the Board of Education. Matthew Brennan, who is often added to the ranks of Dead Rabbits, was in fact a Captain of Police and then Police Justice at the time of the riot. He owned Monroe Hall, home of the Monroe Guard, another target excursion company.  The Monroe Guard was associated, as many “guard” units were, with the taverns of important political leaders. Monroe Hall was later reported by nativist-minded newspapers looking to attack Democrats as the home of the Dead Rabbits. The term came to be used to describe Democrats who supported Fernando Wood, and later all Democrats.

Indeed, John Morrissey was already comfortably well-off from his gambling partnerships by the time of the Dead Rabbit Riot of 1857, operating a saloon, the Ivy Green on Fourth Street in Troy. Morrissey had returned to Troy to get out of New York, where someone he knew (but was not particularly close to) was involved in the murder of virulent nativist William “Bill the Butcher” Poole. Poole’s funeral was considered the largest up until that time in New York and was use to bolster the nativist cause.

Morrissey had been feuding with Poole, recently fought him in a match in New York, and had words with Poole in the bar in which he was later killed in a gunfight. Morrissey went home drunk long before the shooter arrived on the scene, but was arrested on trumped-up charges for the killing. He later told a reporter that he had been afraid for his life by what he saw as an attempt to frame him for murder by nativist politicians in New York. The man who shot Poole, Lewis Baker, argued self-defense and was not convicted, despite two trials. 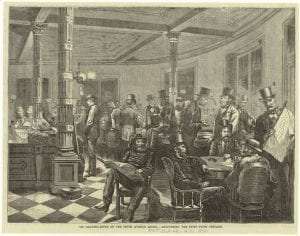 When Morrissey returned to New York in 1859, as one of the city’s biggest celebrities, he invested his Heenan fight winnings in a succession of gambling operations on Broadway. Here well-known rich gamblers like Cornelius Vanderbilt and Fernando Wood played in sumptuous surroundings protected by Morrissey’s payments for police protection, despite their quasi-legal status as private clubs. Morrissey took what he learned operating these high-class gambling houses to Saratoga Springs, operating his first club there on Matilda Street by 1860. His later club, built in 1870 and now known as the Canfield Casino, is a National Historic Landmark.

There had been only minor horse racing at Saratoga in the 20 years before Morrissey arrived, but in 1863 he personally organized racing at what is now known as the Horse Haven track. This was so successful that a racing association was formed by wealthy New Yorkers who hired Morrissey to operate a new track – the current Saratoga Race Course – across the street. It was an immediate success, making Saratoga a horse racing capital.

In 1866 Morrissey was elected to the House of Representatives from the city of New York, and reelected in 1868. In 1869, he was among the first to publicly and actively oppose William “Boss” Tweed. His movement, organized in 1870 at Morrissey’s house and known as the “Young Democracy,” included allies of Samuel Tilden.  The Young Democracy was defeated by the Tweed Ring, but Tilden would eventually bring down Tweed a year later with of all things, forensic accounting. Morrissey was closely allied with “Honest Sam” Tilden, who was then elected Governor of New York and ran in the famously disputed election of 1876. 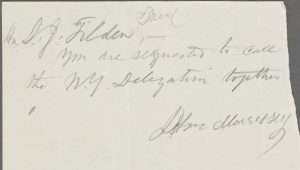 While Tilden was rising, Morrissey shifted toward the New York State Legislature, winning a State Senate seat – twice – against Tammany candidates in two different districts. During his last campaign in 1877, a throat ailment, which had troubled him for decades to the point of his often speaking with a whisper, flared again. After winning the election, he traveled south on his doctor’s advice in hope that the climate would help. It didn’t. He returned to Saratoga and died May 1, 1878 in parlor No. 5 of the Adelphi Hotel. He was just 47 years old.

Morrissey was buried in the Catholic Cemetery opposite Oakwood Cemetery in Troy. His funeral was among the most widely attended in Troy. The State Legislature recessed so legislators could attend, and many did, along with thousands of the city’s Irish, and dozens of sporting men.

Illustrations, from above: A young John Morrissey (detail from a painting held by the Saratoga History Museum); the Morrissey-Heenan fight in 1858 (Leslie’s Illustrated Magazine); A Troy Theatre Advertisement, Dec 29 1858, showing an upcoming appearance by Morrissey; Fifth Avenue Hotel Reading Room, 1871, where Morrissey often hung out (Boston – Fields, Osgood and Co); an 1868 handwritten note from John Morrissey to Samuel Tilden (NYPL).