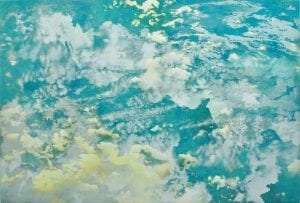 The Marianne Boesky Gallery has announced Echo in Color, Jay Heikes’ fifth solo exhibition with the gallery is set to be on display from February 13th through March 13th, at the gallery’s 507 West 24th Street in New York.

The exhibition will feature a selection of new and recent paintings from the artist’s Mother Sky series and Minor Planets sculptures. The artist’s first comprehensive monograph will be published in cooperation with Gregory Miller & Co. and distributed by Distributed Art Publishers and will feature text by Sarah Lehrer-Graiwer, Jenelle Porter, Philippe Vergne, and an interview between Heikes and Hamza Walker.

The title of the exhibition, Echo in Color, references the perceptual phenomena of synesthesia, a blending of the senses in which the stimulation of one modality produces sensation in another.

Presented alongside the paintings, Heikes will feature Minor Planets sculptures. This series of sculptures has been crafted from a range of materials, including concrete, pyrite, salt, slag, asphaltum, quartz, rope, and dust collected from the artist’s studio in the forms of modeled orbs and disks.

Yale graduate and Minneapolis-based artist Jay Heikes (b. 1975) is known for his heterogeneous practice, which mixes and reinterprets a kaleidoscopic array of media — activating stories, puns, and irony in a cyclical meditation. His most recent body of work employs his preoccupation with the philosophical tradition of alchemy. Themes of evolution and regeneration, stasis and corrosion take form in his artistic actions, recharging Heikes’ previous narrative pursuits and reaffirming the notion that mutation and change are essential to the creative process.