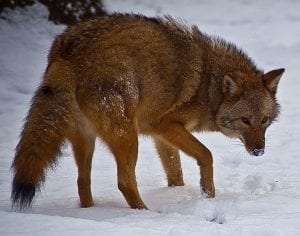 The Eastern coyote is found in many habitats, from rural farmland and forests to populated suburban and urban areas across New York State. Coyotes are well adapted to suburban and even urban environments and tend to avoid conflicts with people.

However, conflicts with people and pets may occur, particularly during the spring denning and pupping period.

If coyotes learn to associate food, such as garbage or pet food, with peoples’ homes, these animals may lose their natural fear of humans and increase the potential for close encounters or conflicts.

To reduce or prevent conflicts with coyotes, take the following steps:

Additional information about the Eastern coyote and preventing conflicts with coyotes can be found on the DEC webpages for Eastern Coyote, Coyote Conflicts; Feeding Wildlife: A Wrong Choice; Tips to Eliminate Wildlife Conflicts; and Regional DEC Wildlife Offices.