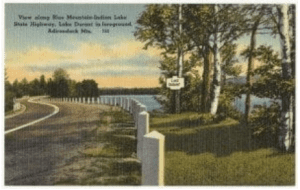 The establishment of the Adirondack Forest Preserve in 1885 was part of growing American appreciation of a back to nature ethic. By the time of the First World War, according to historian Paul Sutter: “Americans produced and consumed voluminous literature on natural and wild themes; they built vacation homes and camps; they initiated a wide variety of programs in scouting and woodcraft; they developed a distinctive hunting culture and ethos; they adopted nature study as a prominent hobby; and the embraced the ‘strenuous life’ that could be found only in the ‘great outdoors.’”

Inadvertently, this interest in wild places laid the groundwork for a future flood of visitors to New York State’s “forever wild” lands and the spread of roads and motorized snowmobile trails throughout the Adirondack Park. For example, in a measure of the influence of the automobile alone in years since the Second World War, there are today more than 5,000 miles of roads in the Adirondack Park, and nearly everywhere in the Forest Preserve is within three miles of a public road. Indeed, the most remote place in the Adirondack Park, the largest park in the contagious United States, is about five miles from a public road.

The flood began as a trickle. At the turn of the century just getting to the great outdoors was a challenge for most Americans. In 1900 there were only about 8,000 automobiles registered in the United States and despite an abiding interest in wild places, most people had neither the money nor the leisure time to travel into the woods in motorized transport. By 1929 however, there were 23 million automobiles owned by one in five Americans.

This new interest in motoring was accompanied by a boom in motor camping. There were about five million auto-campers in the early 1920s and more than three times that many by the end of the decade. It’s estimated that before the Great Depression 10 to 15 percent of Americans were auto-campers.

In the Adirondacks in the 1920s, camping, hunting, fishing, hiking, and skiing all became popular as more New Yorkers were able to drive into the mountains. In 1918, 2,760 Forest Preserve campers were registered, but by 1923 some 1,500 people were counted on a single day at the state-owned Sacandaga River campground in Northville. That same year two Forest Rangers were provided with motorcycles to patrol among all these new visitors. By the mid-1930s the state’s 14 Adirondack campgrounds were hosting 50,000 campers, all they could hold.

So many more visitors necessitated additional facilities to house them, and the state aggressively built tourist facilities on Forest Preserve land. Even before 26 Civilian Conservation Corps (CCC) camps were established in the Adirondacks in the 1930s, an earlier state program put 10,000 men to work in state forests and parks building and improving camping facilities, motor-campgrounds, bridges and roads. The use of Forest Preserve land for these facilities laid the groundwork for the enormous network of public outdoors recreation facilities in the Adirondacks today.

Among the most controversial of these improvements were the truck trails. The CCC “fire roads” built in the 1930s were built to federal standards: 10 feet wide with 2-foot shoulders; 8-10 inches of crushed stone was covered with 4 inches of fine gravel. The Association for the Protection of the Adirondacks, the Adirondack Mountain Club, and others opposed these new roads into the Preserve, but an Attorney General’s opinion in 1933 concluded that the Conservation Department (forerunner of today’s DEC) had the authority to build fire roads to protect the Preserve from fire. The Department did not however, the Attorney General found, have the authority to open these fire roads to motorized use by the public and instead, should do all it could to keep motor vehicles out. Road building began again and by the end of 1936, some 60 miles of new roads had been built on “forever wild” Forest Preserve land.

After World War II, four-wheel drive vehicles (especially Jeeps and later Doodle-Bugs) and then off-road motorcycles (especially Tote-Goats) began to be a more common occurrence on Forest Preserve land. These vehicles were driven on old logging roads, administrative state truck trails, and roads that lumber companies built across Forest Preserve lands in order to log their holdings. Historian Eleanor Brown noted that after the war the Forest Preserve “suddenly lost its natural defense, that of distance that could be traversed only by foot or by guideboat or canoe. Its interior reaches were at the mercy of the motor.”

As the Department of Conservation is today, it’s predecessor, the Conservation Department, was lax in enforcing what rules there were regarding motor vehicles in the Forest Preserve and often actively encouraged the motorization of the Adirondack backcountry. Commissioner Harold G. Wilm (1959-1966) for example, believed that jeeps, dirt bikes, and snowmobiles should be used to access the remote Forest Preserve lands in order to relieve hunting pressure near roadways. 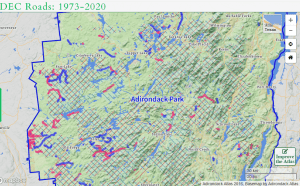 Earlier, in the 1950s the New York State Conservation Department presented a zoning plan for the protection of four “preservation zones” comprised of land along roadways, on summits, fronting some lakes, and other special areas. In all, just 30% of the Forest Preserve would have been restricted from motor vehicle use. This approach was opposed by the Adirondack Mountain Club and the Association for the Protection of the Adirondacks (now Protect the Adirondacks) and a counter plan was offered for a 14-member study commission with seven places held by conservation and sportsmen’s groups. Conservation Department Commissioner Perry Duryea (1945-1954), said the plan was “stacked against” the Department and suggested that the Joint Legislative Committee on Natural Resources conduct a study, to which they agreed.

The Joint Committee had been established in 1951 to survey and study conservation, preservation, and use of the state’s natural resources. In 1959, after several years of reviewing evidence about the various incursions in the Forest Preserve, especially motor vehicles, the Joint Committee introduced what became known as the “Wilderness Bill.” One aim of the bill, according to Committee Chairman Assemblyman R. Watson Pomeroy, was “to grant clear authority to the Conservation Department to regulate, or, where necessary, to prohibit the use of boats or aircraft, in the more remote areas of the Forest Preserve.”

The Wilderness Bill would have placed tight restrictions on motor vehicles in 12 designated wilderness areas, containing more than 150 miles of state truck trails. Pomeroy also suggested that future bills would introduce “wild areas” for particularly spectacular locations, and more intensive recreation areas closer to roads. The legislation, Pomeroy said, was necessary because the “use of jeeps, motor boats and planes as a means of access to the Forest Preserve could not have been foreseen in 1894 when the constitutional protection was adopted.” There was little mention of snowmobiles, because there were so few that they were inconsequential when the bill was introduced in 1961.

Conservation groups responded by arguing that the bill provided too much latitude to the Conservation Department to reduce the wilderness boundaries, which it was charged to set. The primary objections of motor vehicle advocates were raised during one of the public hearings for the bill, held in Saranac Lake in August. The main complaint there was that the bill was too ambiguous and might lead to the “curtailment of travel in areas already extensively used by area residents.” Others, interested in opening the Forest Preserve to more recreational facilities such as ski resorts, said the bill would “make the Forest Preserve fit only for early Indians.”

Following criticism at the public hearings, the Joint Committee withdrew the bill and offered two alternatives in its place. One shortened and revised the original to make it less restrictive; the other reinforced the Conservation Department’s power to regulate motor vehicles on the Forest Preserve. Shortly thereafter the Attorney General issued an opinion that the Conservation Department already had all the authority it needed to regulate motor vehicles in the Forest Preserve, and the Joint Committee withdrew both proposals.

In the place of the Joint Committee, newly empowered Conservation Commissioner Wilm did essentially nothing by directing the Department to study the issue. In general, Commissioner Wilm was not friendly to wilderness conservation efforts. He supported opening 15% of the “forever wild” Forest Preserve to logging and in 1959 spoke publicly in favor of the Adirondack Northway taking Forest Preserve lands. Later, he attempted to create a new category for lands the state purchased with bond money in order to have them excluded from Forest Preserve protections (in a similar fashion the state buys easements today, rather than the land itself, thus avoiding the constitutional protections of the Forest Preserve).

Wilm’s ideas for motorizing and logging the Adirondack Forest Preserve were generally popular among Adirondack sportsmen, who energetically disparaged the politicians of the legislature from downstate, while doing their best to remain friendly with the Conservation Department and their own elected officials. In the end, it was only following additional pressure from the Joint Committee in early 1963 that Commission Wilm was moved to act on the incursion of motor vehicles in the Forest Preserve. The Committee said that the Department should “take such action as may be necessary to regulate or, if necessary, prohibit the use of motorized equipment wherever the wilderness character of the Forest Preserve is threatened thereby.”

Under the threat that the Legislature would act if he did not, on July 11, 1963 Wilm issued a directive which opened hundreds of miles of “truck trails” for public use with motorized equipment, while closing 76 other roads and banning the use of motorized equipment on hiking trails and overland in the Forest Preserve. When this directive was reported in the August-September issue of Conservationist, it was interpreted by local newspapers as an almost complete ban.

What Commissioner Wilm, the Department, and the Joint Committee had not foreseen was that in the time between the Attorney General’s decision in 1961, and Wilm’s action in the summer of 1963, a new class of motor vehicles had arrived in the Adirondacks – snowmobiles. When the issue of Conservationist reached the mailboxes of new snowmobile enthusiasts, a meeting was organized at the Saranac Lake Fish and Game Club to fight the “ban” on snowmobiles.

It was this organization, known as the Saranac Lake Forest and Wildlife Protective Patrol – among the nation’s first snowmobile clubs – which aggressively lobbied the Conservation Department to eventually secure the use of “forever wild” lands for snowmobiles.

In doing so, they greatly expanded the motorized use of the Adirondack backcountry, and secured for themselves the unique privilege of driving off-road and directly into the Adirondack Forest Preserve.

This essay is part of an occasional series on the history of snowmobiling, especially in the Adirondacks. You can read the entire series here.