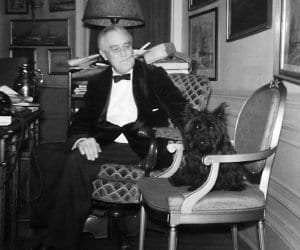 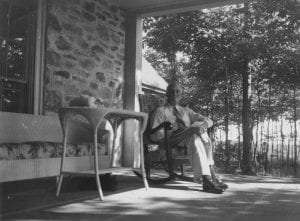 Fala was given to President Franklin Delano Roosevelt as an early Christmas present in November 1940. He was a present from Roosevelt’s cousin Margaret “Daisy” Suckely, who had secured the dog from a friend living in Westport, Connecticut, named Katherine Davies. Daisy trained the puppy until it was ready for the President. The Terrier’s name had initially been Big Boy, but FDR later changed it to Murray the Outlaw of Falahill or Fala for short.

FDR loved dogs. Like Eleanor, Franklin shared the philosophy of how much joy and companionship dogs gave their families. She wrote about dogs, “but if a dog is loved and well cared for and well trained, he will repay his family with the kind of devotion which is rare in any human relationship.”

Fala and the President were inseparable for five years. His beloved Scotty was with him on April 12, 1945, when he died in Warm Springs, Georgia. According to the FDR Library, after Roosevelt’s death, “Daisy took Fala home with her, believing FDR wished her to care for him. However, after a visit from James Roosevelt (FDR’s son), she returned the dog to Eleanor Roosevelt, who would keep him for the rest of his life.” Daisy believed this because she frequently helped the President take care of the dog, especially when he could not take the dog on a trip. 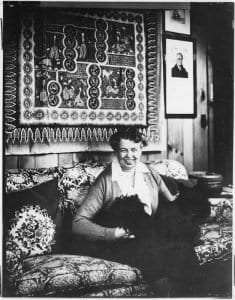 Eleanor believed she could never replace Franklin as Fala’s new master. She wrote of Fala in retrospect, “Fala was always my husband’s dog. He accepted me, but he was never really my dog. He knew he was important and belonged to someone who was important and kept that knowledge all his life. He lived with dignity and some reticence conveyed by his attitude toward the rest of us who were, from his viewpoint, mere ordinary mortals.”

One such example transpired when General Eisenhower visited President Roosevelt’s grave in the Rose Garden at the Hyde Park Estate. The little dog seemed always to be waiting for FDR to return. A blaring siren from one of the escort cars making its way up the driveway sent Fala bolting from the house to greet “his master,” only to be disappointed when it proved to be Eisenhower.

During her time with Fala, Eleanor Roosevelt frequently related the antics of Fala as she would another Scottish Terrier she adopted named Tamas McFala, Fala’s grandson. The two terriers created mischief in and around her estate. Tamas and Fala chased small animals along the path where Eleanor frequently walked them without leashes. The duo sometimes disappeared for hours and, in at least one case, Eleanor recalled, she spent hours looking for the two partners in doggy crime.

Once, when Fala did not return by nightfall Eleanor and her secretary feared the worst. Both breathed a sigh of relief when a guard at the Franklin D. Roosevelt Library telephoned to say that a small boy and his father had just dropped Fala off.  He had spent the night with the family. This was the last straw! In the future, only one dog at a time would be allowed off the leash. When one dog returned, they would switch.

Shortly after Fala made his debut in 1940, he developed a large fan base.  Daisy wrote a biography of the dog in 1942 (still in print). The next year, a short film about a typical day in the White House featured Fala.  Many Fala fans enjoyed reading about his continued antics with Tamas around the home of Mrs. Roosevelt. Children, as well as adults, wrote letters inquiring about the dogs, some written on behalf of other dogs. Many asked for pictures of the famous Scotty. 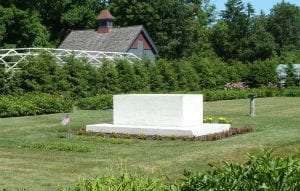 An ailing Fala died on April 5th, 1952 when Eleanor made the difficult decision to euthanize him. A burial was planned for April 6th, but postponed by heavy rain until the next day.  Fala was laid to rest near his friend FDR, in Sara Delano Roosevelt’s rose garden at Springwood in Hyde Park, NY. His grave is marked near the sundial.

Photos, from above (courtesy FDR Library/NARA): FDR in the White House with Fala; FDR seated at Top Cottage in Hyde Park, Fala is sleeping under the table; Eleanor with Fala and his grandson Tamas in Val-Kill; and Roosevelt Grave with Fala and Chief’s graves.