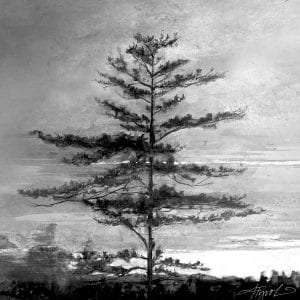 Last summer I regularly passed a stand of towering white pine trees at Camp Plymouth State Park in Ludlow, Vermont, where I live and work.

Most days I saw at least one hairy woodpecker, a few blue jays, chickadees, a pair of broad-winged hawks, and a multitude of red squirrels around the trees.

One day I looked up to their crowns and wondered, “Why are there so many pinecones at the top, and what other animals use these trees?”

Eastern white pines (Pinus strobus) can grow to more than 100 feet in height and range from southern Canada, west to Minnesota and Iowa, east to the Atlantic Coast, and south along the Appalachian Mountains to northern parts of Georgia and Alabama. The tallest conifer in the northeast, the white pine was known as the “mast tree” during Colonial times, when their tall, straight trunks were used as masts for sailing ships. The British crown’s claim to all white pines over 12 inches in diameter was one of the many factors contributing to colonists’ unrest and eventual upheaval. Beyond its usefulness in building ships, the eastern white pine is integral to a plethora of woodland wildlife.

Like most conifers, white pine trees are monoecious, meaning the same tree bears both male and female cones. The male cones are commonly called pollen cones, while female cones are called seed cones. Pollen cones are yellowish and ovoid and grow in spike-like clusters. Each cone is approximately half an inch long, with tightly overlapping scales. Seed cones range in color from pink to green when immature. They grow to roughly 4 to 8 inches in length and turn brown as they mature.

Although these trees grow relatively quickly – adding roughly 3 feet in height each year between the ages of 15 and 45 years – a white pine tree does not bear seed cones until it is at least 5 years old and about 20 feet tall, and it takes up to 30 years for a tree to have viable seed production. Male pollen cones typically occur every other year.

Fertilization is generally a two-year process. In spring of the first year, male cones produce pollen. Each grain of pollen has small wing-like structures that help the pollen become airborne and travel up to 700 feet from the tree – and even further in open areas. If the pollen finds its way to a female cone, it lands and grows into a long, thin tube toward the center of the cone where the egg is located. The pollen combines with the egg, resulting in a fertilized embryo. Usually by fall of the second year the embryo has grown into a seed. Typically, each seed scale of a female cone contains two seeds. When the seeds are mature, the female cone will open and release them.

Seeds are dispersed by attached wings into the wind. If they find their way to the forest floor, these seeds will have the chance to germinate. Some of the wildlife that relies on white pine trees may also assist in reproduction. Animals from mice and voles to squirrels collect unopened cones and often hide them away for future meals. The cones in unretrieved caches may eventually open and produce seedlings.

Eastern white pines, particularly mature trees, are important for a wide variety of wildlife. Over half the woodland bird species in the Northeast live in habitats that comprise white pines, including crossbills, woodpeckers, owls, a variety of cavity nesting birds, and hawks. Older white pines often have areas where bark partially peels away from the tree, providing a safe place for bats to roost and raise their young.

Broken stumps with hollow cavities offer advantageous dens for raccoons and porcupines. Mother black bears use large white pines as “babysitter” trees, sending cubs up the trunk – whose rough bark makes for easy climbing – to the high branches, above danger. Bald eagles and osprey often choose the sturdy branches of white pines – or trees whose tops have blown off – to hold their large nests.

I am always taken aback and humbled when I learn more about a part of nature that seems so common. I’ve walked by white pines thousands of times. Now, when I see these towering giants of the forest, I have a deeper appreciation and think, “I am so glad you are here.”

Tiffany Soukup is a writer, photographer, park manager with Vermont State Parks, and traveler. Illustration by Adelaide Murphy Tyrol. The Outside Story is assigned and edited by Northern Woodlands magazine and sponsored by the Wellborn Ecology Fund of the New Hampshire Charitable Foundation.