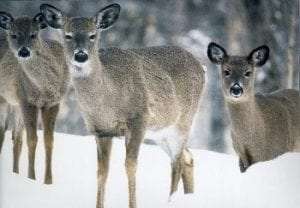 With its long legs, the white-tail deer has the ability to travel through a snow bound forest when there is up to 12 to 16 inches on the ground. As the snow pack becomes denser, crusted, or deeper, the mobility of this hoofed creature becomes greatly restricted.

Throughout the year, deer develop well trodden paths, known as runways. These trails allow the graceful moving animals to move more easily and quickly from one area to another. As snow accumulates on the forest floor, deer continue to utilize these familiar thoroughfares, and their repeated travel packs down the powder similar to what occurs with a popular snowshoe trail after several days of use.

When the snow depth approaches 18 inches, movement through places of undisturbed snow becomes exceedingly difficult, especially for younger and smaller deer, and is often totally avoided. By confining the white-tail’s travel to major runways, deer are prevented from accessing the buds of trees that may only be several dozen yards from a trail.

Deer respond to such restrictive snow conditions by remaining bedded down in favored sheltered spots for days at a time. South facing hillsides where dense evergreen cover helps keep much of the snow suspended on the tree boughs are strongly preferred as bedding sites. These spots also tend to be sheltered from the prevailing northwesterly winds that can create overly harsh chill factors.

The fat reserve that the white-tail acquired during the late summer and throughout the autumn are generally adequate to sustain these creatures for several weeks to a month of very limited feeding. Should the snow pack remain deep for an extended period, and unseasonably cold weather tax their energy reserves for maintaining body warmth, then starvation slowly develops.

One accurate means of determining the fat reserve of a white-tail is by examining the color and texture of the bone marrow contained within its hind leg. Upon finding a dead deer, a wildlife biologist can assess the nutritional health of the deceased creature by cutting into this appendage and looking at the tissue that is within the bone.

For example, a deer carcass that has been recently eaten by a pack of coyotes may reveal that the victim perished from starvation, rather than from an attack by this natural enemy. On the other hand, while a healthy adult deer is easily able to outrun a coyote on bare ground, the odds increasingly favor the coyote as the depth of snow increases. With over two feet covering the forest floor, a pack of coyotes is easily able to catch, attack and kill a white-tail once the quarry is diverted from its system of runways.

Should a crust develop on the snow’s surface, the coyote will fare even better. Also, the generally weakened state of a deer at this time of year, when a crust is more likely to form, allows the coyote to be successful whenever it goes on the prowl for venison.

The carcasses that result never go to waste, as every last fragment will be utilized by one form of wildlife or another. And a reduced deer population only means that there will be more browse for those animals that are eventually able to survive along with the fawns that will be born at the end of spring, improving their chance of surviving, and dealing with the rigors of our northern environment.