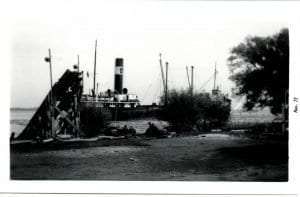 Located at the eastern end of Lake Ontario, Sackets Harbor boasts a stellar history in the War of 1812, but this lake port holds a wealth of other fascinating stories.

After the War of 1812, Sackets Harbor nearly became a thriving lake port, but both the emerging railroads and canal systems quickly excluded the tiny village from ever becoming a Buffalo or Cleveland-size port.

Yet, through the 20th century, the protected harbor offered a lake transport drop-off location for wood pulp, the critical ingredient for the nearby Dexter paper mills. In the 1930s, vessels brought wood pulp from western forests, stopping at Sackets Harbor to unload. Shifting sand bars in the bay prevented vessels from getting close to Dexter, thus making necessary to use Sackets Harbor.

James Brennan, a Sackets Harbor college student in the 1930s, worked summers off-loading pulp wood delivered in the harbor from vessels like the G. Montcalm and L’Emanuel. Wood chunks were drawn up from the water onto a conveyor belt and into a waiting dump truck for the short seven-mile delivery to Dexter. The sound of heavily laden dump trucks straining their gears climbing from the harborside up the slope vexed village residents. 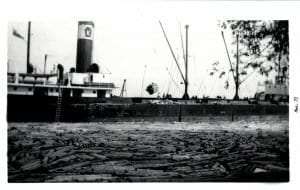 In August 1950, Frederick Braun stopped by Sackets Harbor to photograph. One photograph shows a vessel and logs in water, while the other photo has an onshore conveyor unit moving the corralled logs up into a waiting truck. Fred’s niece Christine Eggleston said “Uncle Fred was an amateur ‘vacation’ photographer who liked taking photos of autos, bridges, machinery, and work boats.”

“The canal steamer in the two photos is Keyshey of Keystone Transports Ltd., Montreal. The Keystone canallers in normal times carried coal down bound from Erie, Pa., to Montreal for the Montreal Light Heat & Power Co. and sometimes brought pulpwood upbound, but I have not heard of them unloading any of it at Sackets.” 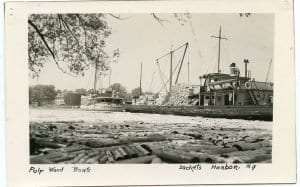 Jay said these images “show two of the many little wooden goelettes (motor schooners) that for years were built and owned in towns along the north shore of the lower St. Lawrence River (most notably at St. Joseph-de-la-Rive). I well remember seeing the G. Montcalm in the Welland Canal in the 1950s bringing up pulpwood. I never saw L’emanuel myself, but she looks aged in those pics and is seriously hogged midships – and likely not long for this world!” 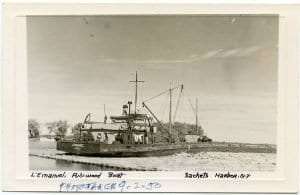 Christine’s uncle Fred documented pulp wood off-loading in summer 1950. Her father also had a connection to the work, if only for a very brief time:

“When my father moved back to Sackets Harbor, one of the many short-lived jobs he had was a stint as a logger, working on the pulpwood brought into Sackets Harbor by boats from Canada. Enormous chained bundles, swung over the ship’s side using a crane and tackle apparatus, were released to tumble into the water. Armed with a peavey and wearing tall leather boots, wool pants, and a red and black plaid wool jacket, my father quick-stepped across the log-filled harbor to break apart jams and move the logs. He was a man of slight build, weighing about 150 lbs. and standing just under 5’7” maybe not the perfect size for wrangling pulpwood logs equal to his weight. He was, however, exceedingly light on his feet. It was frightening work.

My father’s logging career didn’t last long, not even a full season. Working in the pulpwood was a job my father despaired of, as he had never learned how to swim. But Clint could dance, and that was what kept him one step ahead of the rolling logs.”