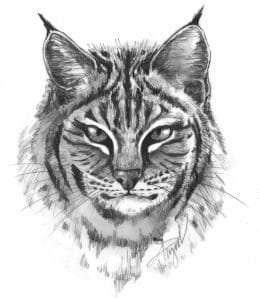 There comes a time in every mammal mother’s life when her young leave. For some, this comes in a matter of weeks, for others it might be years. As I follow bobcat tracks through snow on a mid-winter day, dispersal is on my mind. My 18-year-old son is preparing to fledge, and I ponder this transition as I track the cat through a tangle of wetland shrubs. Is this lone cat one of the kittens I watched play not far from here last summer? Is it, like my son, on its way to new horizons, to set down its mark, and fill its belly with the meat of the world?

This is the time of year when last year’s bobcat babies set off on their own – and the breeding cycle begins anew. In February, an adult female will leave a musky invitation along the edges of her territory. She rubs her cheeks against stumps and rocks, scratches her odor into trees, and sprays urine on the signposts of her landscape. Males are drawn to her. After a brief courtship of playful chases, they mate, near one of the female’s shelters.

Eric Aldrich, who has been documenting bobcat behavior through camera trapping and tracking for the past eight years in southwestern New Hampshire, describes the female’s shelter as a rough jumble of rocks, filled with crags, ledges, and overhangs. He’s documented bobcat courtship and breeding, which takes place over the course of several days. It is a generally quiet affair, according to Aldrich, occasionally punctuated by caterwauling. The male then leaves in search of the next receptive female.

A female’s home range averages about 10 square miles and must have ample food resources and multiple denning sites available to successfully support her and her offspring. Females are more territorial than males, and their territories rarely intersect with those of other females. Males have larger territories, up to 50 square miles or more in northern New York and New England, with fluid boundaries that overlap the ranges of both females and other males.

Kittens are born in April or early May, typically two, although bobcats can have between one and four babies per litter. Their life begins tucked away in a den, a well-concealed refuge, ideally inaccessible to kitten-hunters like coyotes, foxes, and owls. The mother moves the kittens to different locations during the first few months of their lives. Protecting her vulnerable young is essential, and changing dens keeps predators off the trail.

By one month old, the kittens begin to explore their surroundings, and by two months, they are weaned and developing their hunting skills. Bobcats are exclusive meat eaters but are adaptable in what prey they consume. This flexibility enables the bobcat to adjust to a changing and human-influenced landscape. Rory Campbell, a carnivore ecologist, has researched the diet of our bobcats and found they eat a wide variety of prey, including squirrels, rabbits, and other small animals. He said humans’ bird feeding hobby is a boon to bobcats, which will linger near feeders to hunt the many rodents attracted to the seeds.

After spending nearly a year with their mother, the kittens have been well schooled in how to hunt, stalk, and ambush prey. During winter, the cats drift apart, and the young begin their lives as solitary felines. Young males leave first and travel further than their female siblings. The availability of suitable habitat and the density of bobcats within that habitat, determine how far juvenile males will travel.

Young males have been documented wandering for several months or longer and traveling more than 100 miles in search of unclaimed suitable habitat. This journey is not kitten’s play. It is filled with challenges like fragmented landscapes, increasing urbanization, and highways. The risk must be worth the reward.

“Dispersal is the life phase with the highest mortality rates for many species. So evolutionarily speaking, for dispersal to persist it must have a huge advantage,” said Campbell. “Those advantages are in terms of reduced competition, especially with kin, potential for more or bettee resources, and greater gene flow, which often makes for healthier and more adaptable young.” Bent down near the tracks I am following through snowy woods, I send a mother’s wish into the cold February air, for both this bobcat and my son: let them have safe passage and a life filled with plenty.

Susie Spikol is Community Program Director for the Harris Center for Conservation Education in Hancock, New Hampshire. The illustration for this column is by Adelaide Murphy Tyrol. The Outside Story is assigned and edited by Northern Woodlands magazine and sponsored by the Wellborn Ecology Fund of the New Hampshire Charitable Foundation.