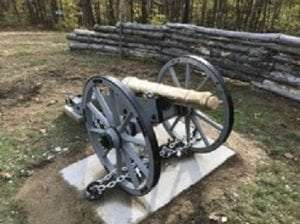 The Bennington Battlefield State Historic Site, an important Revolutionary War battlefield near the New York and Vermont border at Walloomsac in the Town of Hoosick has received a historic replica cannon donated by an American descendant of a badly wounded “Hessian” soldier who survived thanks to an act of battlefield compassion.

The donation came as State Parks also added 11 acres to the 416-acre historic site in Rensselaer County that marks a 1777 battle between several thousand patriot and British forces, which included loyalist and German troops, who were also known as “Hessians,” after the German region of Hesse.

The 11-acres of land recently added to the battlefield site is a portion of the “Tory Fort,” a breastwork defended by about 200 loyalist soldiers.