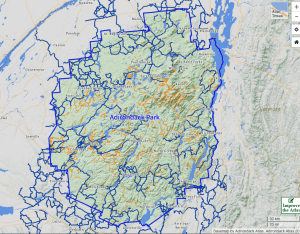 The Open Space Institute (OSI) and the Adirondack Mountain Club (ADK) have moved to jointly file an amicus brief in support of the New York State Department of Environmental Conservation in a case now being heard at the New York Court of Appeals, the state’s highest court.

Protect the Adirondacks (Protect) was recently granted a 4-1 decision by the Appellate Division, Third Department, that Class II Community Community snowmobile trail construction resulted in an unconstitutional destruction of trees on the Adirondack Forest Preserve. Protect is now defending that decision against an appeal by the state.

The State wants to build hundreds more miles of such trails, which Protect successfully argued would be a major change to the Adirondack Forest Preserve requiring a constitutional amendment. They were supported in that effort by The Adirondack Council, the Sierra Club, and Adirondack Wild.

Protect argued that the counting of trees being cut for trails should include all trees. A lower court judge ruled against Protect and they appealed the decision to the Appellate Division which overturned the lower court’s ruling.

The Appellate Division ruling caused uncertainty among groups who build trails in the Adirondack Park as to what degree of tree removal is now permitted on “forever wild” lands.

Siding with the DEC, OSI and ADK argue that the decision to limit tree cutting “would severely limit trail creation and maintenance within the Adirondack Park.”

The Adirondack Mountain Club’s Trail Coordinator Andrew Hamlin said some of the Club’s trail projects were stalled by the decision.

“These projects are important to maintaining a balance between environmental protection and recreational access,” Hamlin said. “When trail work is restricted, trails become more difficult to navigate, which leads to lost hikers and more impacts outside of the trail corridor.”

“Testimony at the trial by our expert witnesses showed how hiking trails can be built, with a reasonable amount of tree cutting, without violating the Forever Wild clause of Article 14 of the Constitution,” a statement from Protect says. “We are unaware of any hiking trails that are being constructed or maintained anywhere in the Forest Preserve that, like the Class II snowmobile trails, require the cutting of up to 1,000 trees or more per mile, require bulldozing and grading with heavy equipment, require flattening that removes stumps, rocks and roots, extend 12 to 20 feet in width, turn an intact forest into a long open grassland, and are designed for high rates of speed by motor vehicles.”

Kim Elliman, OSI president and CEO said “Placing severe limitations on trail construction and maintenance within the Forest Preserve would forever put these places off-limits to the public. A proper balance must be struck to protect the land and make it inviting to the public.”

“The Adirondack Park is in dire need of improved hiking trails. Our current network needs to be revamped to meet modern standards for trail design, which focus on minimizing erosion, protecting surrounding vegetation, and maintaining hiker safety,” Michael Barrett, ADK Executive Director.  “This lawsuit started with snowmobile trails but has spilled over into other forms of recreation that require sustainably built trails to ensure a safe and low-impact backcountry experience.”

Protect says ADK and OSI had the opportunity to intervene in the case years ago and present evidence to the trial court to support their claims, but did not do so.

“We see the arguments advanced by both organizations, which have deep financial and staffing ties to the Department of Environmental Conservation (DEC) and other state agencies, as red herrings designed to give cover to DEC as it pursues its goal of expanding motor vehicle use on the public Forest Preserve,” a statement issued by Protect said.

“OSI runs a revolving door between its staff and the top levels of the DEC. Independent Adirondack conservation organizations, who are not financially dependent on the state, such as The Adirondack Council, Adirondack Wild, and the Sierra Club have sided with Protect the Adirondacks by filing their own amicus motions and briefs in this case.”

A copy of the submitted OSI/ADK brief is expected to be made available if it is accepted into the case by the New York State Court of Appeals.

Article 14 of the NYS Constitution reads: “The lands of the state, now owned or hereafter acquired, constituting the forest preserve as now fixed by law, shall be forever kept as wild forest lands. They shall not be leased, sold or exchanged, or be taken by any corporation, public or private, nor shall the timber thereon be sold, removed or destroyed.”

More information on ADK can be found on their website.

More information on Protect the Adirondacks! can be found on their website.

More information on the Open Space Institute can be found on their website.