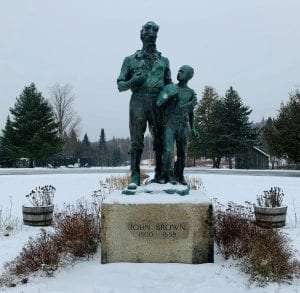 A few weeks ago, on a snowy and cold Sunday, I decided to take a trip to a place in North Elba that I have been meaning to visit since I first moved to Lake Placid – John Brown Farm, the last home of the nineteenth century abolitionist.

Born in Connecticut in 1800, Brown was raised by parents who instilled in him from a very young age that slavery is wrong and that it was his God given mission to help in the fight to end slavery. His involvement in Abolitionism was a life-long one that took him throughout the country, eventually landing him in North Elba in 1849. He was recruited here to assist freed slaves in the North Country settlement of Timbuctoo become self-sufficient farmers.

Brown’s time in North Elba was short, moving again just a few years later to Kansas and was executed in 1859 for his role in the raid on the Federal Arsenal at Harpers Ferry, where he aimed to seize weapons to arm a rebellion to end slavery once and for all.

Brown’s passion for equality is evident throughout John Brown Farm State Historic Site. From the bronze statue at the front of the property, depicting John Brown and a boy, who represents the slaves he tried to free, to his gravestone, to the many interpretive signs describing his remarkable life, the site richly details Brown’s history in a beautiful setting.

On the blustery winter day that I visited, the indoor exhibits were not open, but I plan to return on a summer day to explore them. I spent the remainder of my time at the Farm wandering the wonderful trails on the property, thinking about Brown’s steadfast commitment to the fight for equality and how to be an ally like he was to the BIPOC community. So much and yet so little has changed since Brown partook in the fight to end slavery. There is still much work to do.

If you are interested in learning more about John Brown, stop by the Farm next time you find yourself in Lake Placid. You can also visit their friends group John Brown Lives! from the comfort of your own home to learn about Brown’s legacy and actions you can take to continue his fight today.

This essay was written by Carolyn Koestner, the Lake Placid Land Conservancy PLC’s Strategic Conservation Planner and GIS professional. For more information on the Conservancy’s conservation efforts, visit their website.