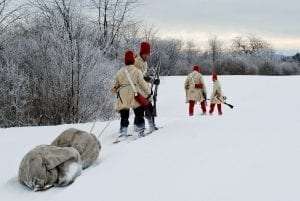 All programs will be presented on Fort Ticonderoga’s Facebook page at the times listed:

• Winter Moccasins at 11 am. Native American moccasins were used by Canadians and French soldiers as footwear for winter travel, like the March 1757 French Raid on Fort William Henry. This program will show the process for recreating these simple deerskin shoes today and how you can make your own.

• 60 Leagues on Snowshoes at 1 pm. This program will explore the time tested techniques of moving and camping along the great warpaths of the north country in deep snow and along frozen lakes.

• Scaling Ladders at 3 pm. In this event, Fort Ticonderoga staff will build a scaling ladder rung by rung. See how three-piece scaling ladders were built at Carillon in the hopes of climbing over the log walls of Fort William Henry.

For more information or to register for an event, visit Fort Ticonderoga’s website.