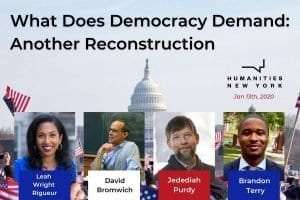 Last month in HNY’s town hall “First Principles,” speakers discussed some of the components they see as necessary for a free and open democracy — trust, free expression, as well as basic civics education. During the second town hall, speakers will focus on how the United States can renew faith in the promise of our democratic ideals.

The 2020 election and its continuing aftermath have occurred in a pivotal moment for American democracy. Not only is the nation burdened with a health crisis and the potential for continued economic devastation, but our civic atmosphere is polarized and acrimonious. Attending to one’s civic duty and casting a ballot is a necessary step in preserving democracy, but voting alone is surely insufficient for democracy’s preservation.

David Bromwich is Sterling Professor of English at Yale University. His books include Politics by Other Means; Moral Imagination; The Intellectual Life of Edmund Burke: From the Sublime and Beautiful to American Independence; and How Words Make Things Happen.

Jedediah Purdy is William S. Beinecke Professor of Law at Columbia University. His books include This Land Is Our Land: The Struggle for a New Commonwealth; After Nature: A Politics for the Anthropocene; The Meaning of Property: Freedom, Community and the Legal Imagination, and A Tolerable Anarchy: Rebels, Reactionaries, and the Making of American Freedom.

Leah Wright Rigueur is the Harry S. Truman Associate Professor of American History at Brandeis University. She is the author of the books The Loneliness of the Black Republican: Pragmatic Politics and the Pursuit of Power and Mourning in America: Black Men and Women in a White House.

Brandon M. Terry is Assistant Professor of African and African American Studies and Social Studies at Harvard University. He is currently completing two books, tentatively titled, The Tragic Vision of the Civil Rights Movement and Sovereignty, Soulcraft, and Suffering.

This program is free and open to the public, and will be held via Zoom. For more information or to register, click here.

Photo of a crowd waves flags at the 2016 inauguration by Ted Eytan.