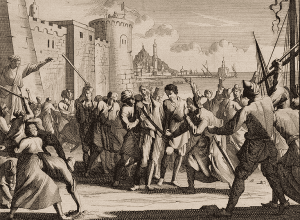 Throughout the early modern era, North African raiders known as Barbary Corsairs, trolled Europe’s coasts from the Aegean Sea to the Netherlands and as far north as Iceland in search of European slaves. American ships were among their victims.

The Hudson Area Library and the Jacob Leisler Institute for the Study of Early New York History will host “The ‘Turkish Captivity’ of Jacob Leisler and the Susannah,” a virtual lecture with David Voorhees, set for Thursday, January 28th.

The lecture focuses on the Susannah’s dramatic captivity, the efforts to obtain the prisoners release, and their enslavement’s subsequent impact on New York politics.

Dr. Voorhees is director of the Jacob Leisler Papers Project, formerly located at New York University, as well as the Jacob Leisler Institute headquartered in Hudson. He’s also managing editor of de Halve Maen (The Half Moon), a quarterly scholarly journal published by The Holland Society of New York. An NYU research scientist, he is a former managing reference history editor at Charles Scribner’s Sons and has published numerous historical works and articles, and been a consultant on historical exhibits at the Museum of the City of New York and the Bard Graduate Center in Manhattan among others.

This program will take place from 6 to 7:30 pm via Zoom. For more information or to register, contact Brenda Shufelt at (518) 828-1792 x106 or brenda.shufelt@hudsonarealibrary.org, or visit the Hudson Area Library website.

This lecture is the first of four collaborations between the two organizations, each featuring an expert in early colonial history. A question and answer period will follow the talk.