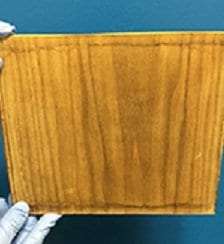 As a card-carrying, registered tree hugger, I have long touted the benefits of trees such as carbon storage, energy savings and improved mental health. And beyond the familiar tree-related blessings such as maple syrup, lumber and firewood, I’ve written about some obscure things like birch-based candy that fights tooth decay, and health-promoting chaga tea derived from a birch fungus. Then there’s basswood bark for fiber, elm bark for baskets, and pine bark for lunch.

That stuff is all pretty straightforward. More highly processed wood products, though, are a mystery to me.

Even a fairly mundane example like how a pile of dirty logs becomes a decidedly coveted treasure – I’m speaking of toilet paper, of course – seems like rocket science. But recent developments are truly mind-blowing. Without a doubt, tree-derived stuff has risen to a whole new level: the Japanese will soon rocket a wooden satellite into space.

A joint venture between Kyoto University and Japanese logging company Sumitomo Forestry aims to have the world’s first wooden satellites orbiting the Earth by 2023. Really. There are an estimated 6,000 satellites now orbiting the Earth, and most of them are non-functional. Apparently, each time a dead satellite re-enters our atmosphere, it produces alumina particles as it burns up, and these micro-bits remain in the stratosphere for years, eating away at the protective ozone layer. Of course, when wood burns it does not produce alumina. Toasted marshmallows, perhaps, but not any dangerous pollution.

Plus, if one of these satellites should break up in space, wood chips are way less dangerous to the International Space Station than the myriad nuts, bolts and metal shards floating around up there. The engineers at Kyoto University aren’t using plywood or OSB, obviously. Researchers from the University of Maryland, the National Institute of Standards and Technology, and other institutions have found various ways to make wood super-strong and amazingly light and thin.

The University of Maryland’s “super wood,” as they call it, is equal to steel in strength, yet is lighter than aluminum. Dr. Liangbing Hu, leader of the UM research team, says their low-cost innovation will rival steel and titanium alloys in construction uses, and is much cheaper. Hu expects it to be used in cars and planes in the future (which makes sense, since using it in the past would be tricky).

Scientists at the National Institute of Standards and Technology have combined wood fiber with, of all things, a marine worm to create a product which is comparable to super wood, but is more flexible. Similar work is being done in many other countries, including France and Sweden, where engineers have focused on transparent wood for shatter-proof windows.

The recent news (see the BBC’s December 2020 report) about Japanese engineers branching out into wood satellites is pretty amazing, but wood has been moving into unexpected areas for some time now. A very cool example is San Francisco-based Allbird, which since 2014 has been making soft, comfortable wood-fiber running shoes. Made from sustainably grown eucalyptus trees, the sneakers are said to be unusually light, cool and comfortable, especially good for hot climates.

But that’s a pedestrian use compared to what French tire maker Michelin has been doing since 2018. It’s hard to believe that a giant manufacturer like that would take a page from Fred Flintstone. While Fred’s tires were puncture-proof, Michelin’s wood-based tires will look and perform like conventional tires, which on average are 80% petroleum-derived.

Michelin engineers have found a way to produce elastomers – which are stretchy compounds, as you might imagine – from paper-mill waste. These tires are expected to be rolled out within the next two years. Wood-based pneumatic tires can still be pierced by a nail, but are way more comfortable than solid logs. I only hope that companies that produce braking systems aren’t inspired by the Flintstones as well.

And finally, a research team at the University of Delaware has developed a way to make adhesive polymers from tree lignin. By volume, the vast majority of a tree is cellulose. Trees produce lignin for strength on an as-needed basis because it takes a lot of energy to make; on a windy site a tree will produce more, and the same tree in a protected location will produce less. It’s analogous to a normal parking garage, which needs some reinforcing steel in the cement. If that garage is intended for tanks and trucks, a lot more steel had better go in the ‘crete.

Anyway, the University of Delaware group, led by professor of Materials Science and Engineering Dr. Thomas Epps, has created a low-cost adhesive from these lignin polymers. They reportedly made a transparent tape that they say performs as well as commercial Scotch tape. Dr. Epps is now experimenting with a wide variety of tree species to see if the lignins, which differ slightly from one kind of tree to another, could have unique applications.

Considering the miracles that trees are, think about planting a few this spring. You never know – you might be growing an actual cure for the common cold.