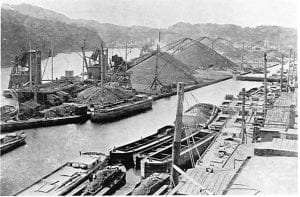 The positive impacts of the Delaware & Hudson Canal on Sullivan County were indisputable. With its opening in 1828, the 108-mile-long waterway made it possible for the first time to easily transport goods in and out of the area, and directly led to the growth of the tanning and bluestone industries. Entire communities, such as Barryville, Wurtsboro and Phillipsport, owe their very existence to the D & H, and while the canal was in operation, each was among the largest communities in the county in terms of commerce and population.

The negative impacts of the Canal on the region it served were less numerous and less well-known. Among them was the role it played in the transmission of communicable diseases, many of which had no effective treatment in the days before antibiotics.

Because the canal directly linked the remote communities of Sullivan County with the Hudson River and New York City, boats traveling up the Hudson from New York to Rondout, which served not only as a busy port on the river but also as the terminus of the D & H, would occasionally bring with them passengers or crew infected with one or another of the diseases that then seemed rampant in the overflowing metropolis. The disease could then easily spread along the canal if a member of the crew of a canal boat was exposed before it headed westward.

The canal itself was also a breeding ground for disease, with its relatively shallow, stagnant water, often contaminated with human and animal waste.

A deadly outbreak of scarlet fever that ravaged Pond Eddy and Barryville, among other communities, in December of 1880 was attributed to the canal.

Although generally controlled today with antibiotics, scarlet fever was a killer in those days, especially among children, and several epidemics struck the United States between 1820 and 1880. The association between the disease and the streptococcus bacteria responsible for it did not come about until 1884, and a full understanding of the cause of the disease was still decades away, but after 1880 there was a pronounced decrease in the number of outbreaks, due mainly to effective public health measures put in place in urban areas. Those measures were nearly non-existent in rural places like Sullivan County, which were typically years behind the cities in learning to control outbreaks when they did occur.

“Scarlet fever is raging in this part of the country,” the Port Jervis Evening Gazette reported on December 11, 1880. “A family of three children are affected with it at Pond Eddy, and at Barryville there has been several deaths. First class physicians say it originates from the Delaware & Hudson Canal. For years, the filth of inorganic matter has been allowed to accumulate on the bottom of the ditch.”

The article goes on to claim that the canal company had been promising to clean the bottom of the canal for years, and was supposed to undertake the project that very winter. Given the poor season on the waterway that year, which had been plagued by drought, the article noted that the cleaning project would provide much needed employment for locals and “would greatly improve the health of the community.”

Stories like these notwithstanding, the D & H Canal remains among the most significant enterprises in the history of not just Sullivan County, but of the nation as a whole. James Eldridge Quinlan wrote in 1873 that “the benefit of this canal to Sullivan is a mere bagatelle when compared with its benign influence on the coal-region of Pennsylvania, on New York and other cities, and on the country at large. Its success led to other works for a similar purpose, which now minister to the comforts of the poor, and add to the wealth of the rich. Destroy the coalfields of the Lackawanna, and the public improvements which have been made to convey the carbonaceous deposit to those who consume it, and you will bring upon an immense number of the human family an evil not exceeded by famine and pestilence. From such a contingency only could we learn truly to estimate the benefits conferred by William and Maurice Wurts, whose memory should be honored by all good men.”

Photo of crews of canal boats unloading their coal at Rondout.