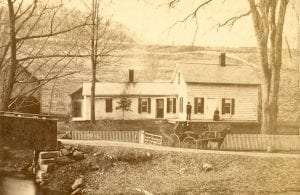 The year 1886 in Washington County, New York, ended on an optimistic tone.

“But thou, the old year, has not been a very hard one, especially,” The Granville Sentinel reported on December 31st, 1886.

Extended periods of drought followed by weeks of unseasonal warm rain gave way in the final days of the year to seasonal weather.

“Sleighing is fine and all are enjoying it.”

As it turned out, it would be one of the best winters for sleighing ever.

Christmas had passed with an unusual abundance of peace, good will to all.

“We are happy to say that the Christmas day passed off quietly and pleasantly without any of the drunken brawls which are so common on such days,” the Middle Granville correspondent reported.

The harvest had been plentiful, despite the extreme weather.

“The crops throughout the county have been abundant – as they have been in Granville and vicinity. Our merchants, slate and other manufacturers have enough prosperity. The wolf has not visited the doors of many of our people.”

The year ahead looked promising.

“The prospects of another year are still brighter. Slate men say that the coming year will be one of the best ever experienced by them.”

“This past year has been one of the most prosperous years in the Sentinel since its establishment nearly twelve years ago. We feel confident that a still greater prosperity awaits in the coming years.”

On December 10th, the Sentinel had reported that M. Price of New York City bought the Granville shirt factory and planned to hire 50 additional shirt makers.

Shirt factories had opened in Shushan and Salem in July.

The prosperity trickled over to the newspaper industry.

The Sentinel expanded from four-to eight pages weekly on February 12th, to 12 pages on December 12th, and to 16 pages beginning December 16th until the first issue in January, when it was 10 pages.

“This past year has been one of the most prosperous years in the Sentinel since its establishment nearly twelve years ago. We feel confident that a still greater prosperity awaits in the coming years.”