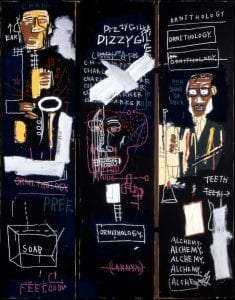 The video series includes three segments, Jazz and Bebop, Punk and No Wave, and Bebop to Hip-Hop via Basquiat, where musicians, creatives and scholars discuss the impact of each music genre on Basquiat’s now iconic style. All three segments were filmed at The Broad, in newly installed Basquiat galleries displaying the museum’s deep representation of the artist’s work.

Home to one of the most significant collections of Basquiat’s art, The Broad seeks to honor his legacy by exploring its musical foundations. For the first time in the museum’s five-year history, all thirteen paintings by Basquiat in the Broad collection will be on view when the museum reopens to the public, including Horn Players, Untitled 1981, and With Strings II. New digital tours and a segment of the series Up Close with The Broad’s Curators will give the public access to the Basquiat installation as well as a deeper look at his works while the museum is currently closed due to COVID-19.

Launching on January 21st, across The Broad’s digital platforms, the first video segment of the series, Jazz and Bebop, was produced, co-directed and written by Alyssa Lein Smith of Quincy Jones Productions and features LA jazz musician Terrace Martin, as well as input from Quincy Jones himself. Martin delves into how the bebop genre, birthed in New York City much like Basquiat, played a role in his artistic vision.

The series includes works by bebop artists such as Charlie Parker, Dizzy Gillespie, Thelonious Monk, and Max Roach. Music for this segment includes Ornithology by Parker, Hot House by Parker and Gillespie, Ol Man Rebop by Gillespie, and music from Martin’s Dinner Party.

On January 28th, The Broad will launch Punk and No Wave, hosted by James Spooner, co-founder of the Afropunk Festival and who ran an underground club on Canal Street in the early ‘90’s. The segment features tunes by James Chance and The Contortions, Teenage Jesus and the Jerks, Basquiat’s band Gray, Liquid Liquid, DNA, and Mars.

Following Punk and No Wave comes Bebop to Hip-Hop via Basquiat, featuring Professor Todd Boyd of USC. He will speak about the through lines from bebop to early hip-hop via use of particular iconography in Basquiat’s paintings and showcase musical pillars such as Public Enemy, Rammellzee, and Grandmaster Flash and the Furious Five.