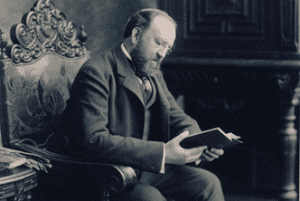 Spencer Trask awoke on the morning of December 31st, 1909 in the last compartment of the last sleeper car on the Montreal Express as it neared New York City on the D&H Railroad line.

Getting dressed, his thoughts may have turned to the three passions that dominated his 65 years. He did not know then that it would be the final day of his eventful life.

Trask was born in 1844 in Brooklyn, the son of Alanson Trask and Sarah Marquand Trask. His early years were immersed in his first passion, to become a successful businessman like his father. Alanson Trask was of New Englander of puritan stock, descended from a family that arrived in Massachusetts in 1628. Two centuries later, Alanson became the first of the family to move away, settling in the city of New York. The Trasks were a prominent family of some means, but Alanson took their fortunes to a new level. Investing in a shoe manufacturing business during the Civil War, he became an overnight multi-millionaire by today’s standards, selling shoes and other goods to the Union Army.

Son Spencer entered Princeton in 1862, and upon graduating four years later entered the field of investment banking. Focusing first on providing venture capital funds to the idea men of the post-Civil War era, he had an uncanny ability to pick winners, most famously backing unknown inventors, such as Thomas Edison. Later he and his firm, Spencer Trask & Co., took on the challenge of rescuing struggling businesses. He was among the financiers that saved the New York Times from bankruptcy in the late nineteenth century, becoming President of the newspaper from 1897 to 1906.

By that time, his fortune made, he could indulge his other passions. In 1874 he had married Katrina Nichols, daughter of another elite New York family, whose own passions centered around the cultural and literary world. That partnership was to bear fruit in later years. The Yaddo Foundation, first conceived by the Trasks in 1900, opened its doors to members of the artistic community after his death. Authors, painters, sculptures and musicians availed themselves of that restful retreat located in the woodlands near the Saratoga Racecourse.

For Spencer and Katrina Trask, the decade of the 1880s was filled with both joy and sorrow. In 1880 their first child, Alanson, named after his grandfather, died at the age of five at their Brooklyn home. Distraught, they made a life changing decision to seek a peaceful place in the country to help them deal with their loss. They were already familiar with the resort town of Saratoga Springs, having visited there during the summer social season. Spencer’s father had retired there and taken up residence in an estate he named “Ooweekin,” which they supposed a Native word meaning “home of rest.”

In 1881 they leased the former Barhydt estate for the summer. Katrina was so enchanted they purchased the 155-acre property for $16,500 the next year. Father and son now owned adjacent retirement estates. Ooweekin was on Nelson Avenue, (later the estate and horse training facility owned by John Hay Whitney), and the soon-to-be named Yaddo on Union Avenue, connected by a road now enveloped by private property south of the NYRA backstretch.

Tragedy struck again in 1888 when daughter Christina and son Spencer, Jr. died of diphtheria they had contracted from their mother Katrina, who survived. One year later their fourth child, Katrina died three days after birth. Saddened, but still resilient, they plunged themselves into expanding their estate. When their renovated Queen Anne style home was destroyed by fire in 1891, they immediately set to work to construct the large Gothic style mansion, still the centerpiece of Yaddo today.

During this time, Spencer indulged his third passion – using his resources and influence to address what he saw as the dark side of the Gilded Age. In a town whose life blood was gambling, he railed against it, spending $50,000 and creating his own newspaper, the Saratoga Union to promote his views. When several companies were formed in the 1890s to extract carbonic gas from the springs – thereby threatening the springs and their park-like surroundings – he swung into action. Trask worked with Republican Governor Charles Evans Hughes to secure passage of the Anti-Pumping Act of 1908, followed by the establishment of the State Reservation in 1909, which was given the authority to purchase the land that was to become the Saratoga Spa State Park.

Trask was appointed to head the three member commission and it was on Reservation business that he traveled to New York on the last day of 1909. While dressing in his compartment, the train was halted by a signal. A freight train following behind failed to stop and plowed into the passenger train, crushing the last car, and ending his life. His legacy lives on in his adopted hometown. Katrina commissioned family friend Daniel Chester French to sculpt the Spirit of Life in Congress Park in his honor, and Yaddo continues to welcome artists to its peaceful grounds.

Jim Richmond is a local independent historian, and the author of two books, “War on the Middleline” and “Milton, New York, A New Town in a New Nation” with co-author Kim McCartney. He is currently researching the early history of the Saratoga Spa State Park. Jim is also a founding member of the Saratoga County History Roundtable and can be reached at SaratogaCoHistoryRoundtable@gmail.com.

Photo of Spencer Trask at his Yaddo Estate.