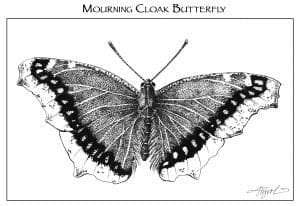 I consider the lack of biting insects and other invertebrates, to be a wondrous gift of the winter season.

I can wander unmolested through wood and field absent the attentions of mosquitoes, deer flies, and ticks. And aside from a short list of “usual suspects,” insects are a rarity to be encountered in the winter woods.

This begs the question: where do the insects go in winter? The short answer is “pretty much everywhere” – and in every insect life stage: as eggs, larvae/nymphs, pupae, and adults. Where and how each species makes it through the winter season depends very much on the individual species. While some insects, like the monarch butterfly, fly south for the winter, others have adapted to be able to stay here through the colder months.

Many aquatic insects go about their submerged lifestyles as they did in other seasons, just with the addition of an icy glass ceiling. Colder water holds more oxygen, which is an advantage for these insects, and at least some predatory fish slow their foraging activities in frigid water. Most aquatic insect larvae and nymphs do the bulk of their feeding and growing in winter and emerge as non-feeding adults in the other seasons.

Terrestrial insects employ diverse strategies to weather winter conditions. Mourning cloak butterflies and several other species hibernate at temperatures well below freezing. After reducing the water content of their bodies by as much as a third, they produce antifreeze compounds, such as glycerol or sorbitol, to prevent the formation of tissue-destroying ice crystals. They hunker down under tree bark or in tree cavities and wait out the deep freeze. In spring, they open their wings, and bask in the sun to get warm enough for flight. Their dark wings and bodies help with the solar heating, and dense hair helps trap the heat.

Honey bees, European immigrants like myself, team up to form a winter cluster around their queen. A bit like a three-dimensional rugby scrum, winter clusters straddle several honeycombs and in large hives can exceed basketball proportions. As temperatures fall, honey bee metabolic rates increase, keeping the bees substantially warmer than the ambient temperature. The bees on the outside of the cluster serve as an insulating layer trapping the sugar-fueled heat.

You may have also encountered some insects trying to make your home theirs to survive the winter chill. Box elder bugs and Asian ladybeetles move into structures, where we see them coming and going in fall and spring.

Many insects spend the winter as eggs that simply hatch into a new generation when the weather improves. There are examples too numerous to mention, but my personal favorite, at least in terms of their parental care, is the gypsy moth. Before the big chill arrives, female gypsy moths lay eggs in dense clusters around the bases of trees. The female pulls hair from her own body and uses silk to attach it to the egg cluster, providing some modicum of protection from the elements.

The hairs are irritating to the touch and may also serve against predators. Spring hatchlings use silk of their own making to “balloon” away on the wind, Charlotte’s Web style.

The list of winter pupating insects is also long; among the more familiar are some members of the swallowtail butterfly family (Papilionidae). The familiar tiger swallowtail and the eastern black swallowtail both spend the winter secure in silken pupal cases spun by the larvae. All appears quiet in a chrysalis to the casual observer, but the stillness belies the cellular migration that transforms the caterpillar body into a butterfly. This process is driven by daylength and temperature, cues than ensure successful timing of butterfly emergence in spring.

And what about those winter wandering “usual suspects” I mentioned above? I’ve taken a few rambles this winter to see who might be braving the snow. My December trips were a bust as far as insects went, but January has yielded dozens of non-biting midges, small winter stoneflies, a cranefly in the genus Trichocera, and an energetic snow scorpionfly backpacking his mate about the place. The cranefly even mustered a brief flight when it grew tired of me placing it on my glove for a better photograph. What brought such an abundance of mid-winter insect life? I have no idea, but I’m taking it as a good omen for 2021!