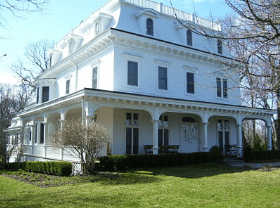 In fiction and research, the history of an estate is often used to throw light on the lives of former residents and the cultural environment in which they acted. The monumental white mansion now known as Bevin House, Long Island, hides an intriguing tale that offers a snapshot of New York’s cosmopolitan past.

Built in 1862 on grounds sold by Native American Chief Asharoken to English settlers in the mid-seventeenth century, the estate was originally named in honour of a Swedish-born naval engineer and later rented by a French novelist who used its facilities to pen one of the best-selling books ever.

In 1638 the Swedish government employed Dutch explorer Peter Minuit to help establish a colony along the lower reaches of the Delaware River. The settlement was soon inhabited by some 600 Swedes, Finns, Danes, and a few other Europeans.

Trying get a foothold in the fur and tobacco trades, the Swedish West India Company found itself in conflict with Dutch and English settlers. The territory was crushed by Peter Stuyvesant’s army in 1655, but New Sweden became ingrained in the nation’s collective memory. Nordic migration in subsequent periods focused almost exclusively on the Americas.

Sweden was for long an ethnically heterogeneous and stable kingdom. There was no inquisition, no pogroms, and no socio-political revolutions. Bar a few Moravians, no religious sect fled the country. Conscription into military service was relatively brief. Migration was insignificant.

A series of poor harvests during the 1850s started a mass resettling process that lasted up to the 1930s. As many as one and a half million Swedes left the country. Most migrants sailed from Gothenburg to Hull (home of the Wilson Line), before travelling by train to Liverpool from where they were shipped via Queenstown, Ireland, to North America (these were profitable decades for shipping companies such as Cunard, White Star Line, and others). By 1910, Chicago had a greater population of Swedes than Gothenburg.

Most of these immigrants made their way to territories in the Midwest, drawn by the promise of open land, and encouraged by officials seeking agricultural workers to settle in remote regions. The dramatic history of the rural trek from Sweden to America is chronicled by Vilhelm Moberg in The Emigrants (the first of four novels was published in 1949). 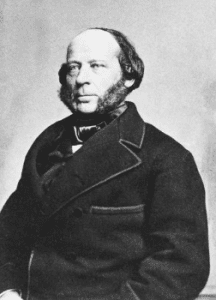 Most Swedish migrants settled in the countryside to continue their relationship with the land – but not Johan [John] Ericsson. His career took a different direction.

Born in July 1803 in the province of Värmland, his father had worked as a “director of blastings” during the excavation of the Göta Canal. At the age of seventeen Johan joined the army and was sent to northern Sweden as a topographical surveyor.

Impatient with Sweden’s slow industrial development, he moved to London in 1826 where he ran a business from Fore Street, Limehouse. In 1829 he built the steam engine Novelty which entered a competition arranged by the Liverpool & Manchester Railway. Although a fast machine, it suffered technical problems. The contest was won by Robert Stephenson’s design of the Rocket. 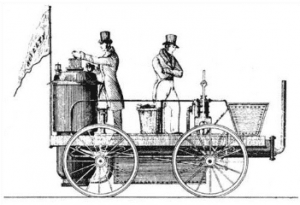 Ericsson’s costly experiments brought him into financial trouble. In May 1832 he was sent to London’s King’s Bench Prison for debt. After his release, a failed marriage and further career obstructions made him pack his bags and, in 1839, take his innovative ideas and designs to America.

Having settled in New York, he was employed at James Cunningham’s Phoenix Foundry on West Street. After the latter’s death, the business was continued by Cornelius Henry Delamater and his associate Peter Hogg. When Hogg retired, the firm was re-formed as the Delamater Iron Works, and moved to a location where West 13th Street meets the Hudson River. By then Ericsson had become the company’s highly rated naval engineer. 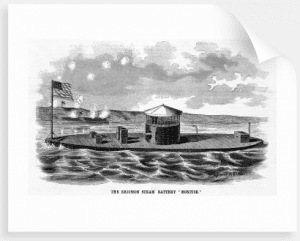 Inventor and entrepreneur worked together with a perfect understanding of separate responsibilities. Ericsson came up with the concepts; Delamater developed them for construction. Known as the “asylum,” they turned the Iron Works into an R & D center where inventors could try out new ideas.

During the Civil War, Ericsson proposed to the Navy Department his design of a steam-powered warship with a screw propeller. USS Monitor was launched in January 1862. It carried an armored revolving turret that revolutionized war at sea. Ericsson and Delamater worked on other vanguard projects, including the technologies for self-propelled torpedoes, solar (‘sun’) engines, and submarine vessels.

In 1862, Delamater had a twenty-two room white mansion built in French Second Empire style on Eatons Neck peninsula, overlooking Duck Island Harbour, Northport. He named the estate “Vermland” after the Swedish province of Ericsson’s birth. Once his grandson Sydney Bevin had inherited the estate, it became known as Bevin House.

When Delamater died in February 1889, Ericsson was deeply distressed and he passed away shortly after. As he had wished, his remains were brought to Sweden for burial in Värmland on USS Baltimore. Some 100,000 people joined the departure ceremonies, including veterans of the Monitor. 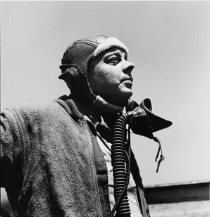 Antoine de Saint-Exupéry (Saint-Ex) was born in Lyons in June 1900 into a family of minor nobility. He was a poor pupil at school and failed his studies in architecture as he longed for a life of action. A decisive moment came in 1921 when he was called up for military service in Strasbourg. Learning to fly changed his life.

He joined the Compagnie Latécoère which had developed a network of routes from France to Morocco and Dakar. Managing the desolate airstrip of Cape Juby, Western Sahara, filled him with the joy of solitude. The discipline and danger of flying lifted his creative powers. A passion for solo flights became the storyline of his debut novel Courrier Sud (Southern Mail, 1929).

He was then assigned to South America, working on mail routes that linked Buenos Aires with Rio de Janeiro, Patagonia, and Paraguay. His love for night flights over the Andes became the subject of his second book Vol de nuit (1931) which established his name as a novelist of note.

In 1931 he married the tiny but wildly extravagant Salvadoran-born divorcee Consuelo Suncín de Sandoval. It proved to be an explosive union. Both partners had numerous affairs, they were for ever quarreling and about to separate, but never did.

Soon after that eventful year, Antoine’s employer went bankrupt. His pilot career was finished as all independent airlines were integrated into Air France. The role of Saint-Ex, now hailed as the “Joseph Conrad of the Skies,” was reduced to propagandist for the national airline. 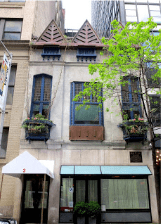 In 1940, he traveled to New York, intending to spend four weeks there and seek support for the French war effort. Unable to return to occupied France where his novels had been banned by the Vichy regime, he was stuck for two years. Although his wife joined him later, it proved to be a difficult period. He felt isolated, unwell, and never managed to learn English.

Two factors made his stay bearable. First of all, he met up with an old friend from the Sorbonne, the painter Bernard Lamotte who occupied a studio known as “Le bocal” (fishbowl) on the second floor of 3 East 52nd Street, Midtown Manhattan. The location was a bohemian refuge where expatriate French artists and New York personalities congregated.

Saint-Ex spent a great deal of time at Lamotte’s place and, finding solace in writing, he sat down and composed parts of Le petit prince, a tale about an interstellar traveler who comes to earth in search of friendship and understanding. 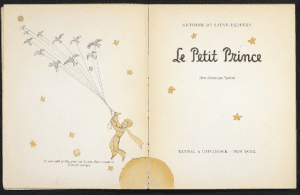 In 1942, Consuela persuaded Saint-Ex to rent Bevin House. He would later described the estate as a “haven for writing.” It was here that he completed the text and drawings of his story.

In the meantime, he was keen to enlist in Charles de Gaulle’s Free French Forces. Saint-Ex finally left New York in 1943 to join up with a squadron in Algeria. In May 1944 he was posted to Sardinia. Shortly afterward he disappeared on a reconnaissance flight over southern France. Much later, in 2004, wreckage of his plane was recovered from the Mediterranean near Marseille. A fisherman netted a silver bracelet with the pilot’s name and the letters NYC USA. 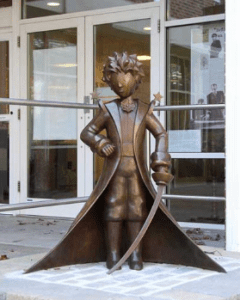 Before leaving for Europe, Antoine had knocked on the door of his inspirational friend Silvia Hamilton to hand her a paper bag containing the manuscript and drawings of his novella. First published in April 1943 (in English and French) in New York by Reynal & Hitchcock, the book was an immediate success. By December it had gone through at least three printings. In France, Gallimard could not publish the story until after liberation in 1945.

The most translated French book, Le petit prince has never gone out of print. Katherine Woods’ English translation remains to many close readers the definitive version (although there are numerous later attempts). In 1968, Manhattan’s Morgan Library and Museum acquired the original manuscript of Le petit prince, along with other drawings that were omitted from the book.

In September 2006, a Little Prince statue was unveiled in the courtyard of Northport’s Public Library which meant more than the mere memory of a writer’s presence. The small bronze is confirmation that even in adversity the creative impulse is our greatest gift.

Illustrations, from above: Delamater’s ‘Vermland’ mansion built on Eatons Neck in 1862; now known as Bevin House; portrait of John Ericsson courtesy Library of Congress; Contemporary drawing of Ericsson’s Novelty; Ericsson’s design of a steam-powered warship Monitor, 1862; Saint Exupéry, the aviator in 1944 courtesy The John and Annamaria Phillips Foundation; The property at 3 East 52nd Street where Saint-Ex wrote several chapters of The Little Prince; First print of Le petit prince by Reynal &amp; Hitchcock, New York 1943; and The Little Prince bronze statue the courtyard of the Northport Public Library, modelled from one of Saint-Exupéry’s illustrations.