There is an annual tradition near the end of every ski season at Gore Mountain – a party sponsored by the Backwoods Ski Club for the workers and volunteers who make the season happen.

The Club provides a dinner buffet and beverages, and Club members mingle and merge with the lift operators, ski patrol members, ski instructors, snow makers, groomers, maintenance workers, concession and food service workers, office staff, and those who are constantly working to clean up the mess.

Club members, who have sponsored the party over the last 20 or 25 years, have come to call it “The Worker’s Party” and it’s reminiscent of the founding of the Club more than 50 years ago. 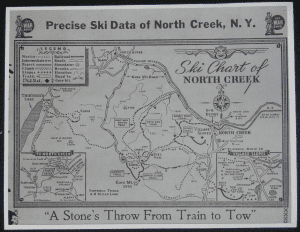 It began at Little Gore, part of what was known as Old Gore (later the Village Slopes, or the North Creek Ski Bowl), in the years before the state-owned Gore Mountain Ski Area open higher on the mountain in 1964. “The ski school at ‘Old Gore’ was one of the first in the east whose instructors passed the rigorous US Eastern Ski Association (USEASE) instructor certification tests,” original Backwoods Club member Ernie (E. J.) Johnson remembered. “These instructors were among the best.”

Some time in the late 1940s or early 1950s a visiting instructor referred them as “a bunch of backwoodsmen” and they embraced the label. One of them made wooden pins for the group. In the early 1960s, club “members” and other skiers would gather at the parking lot adjacent to the run out at the Hudson Trail at Old Gore.

In the parking lot, they would change boots, pack their gear and wait on members of their party, which turned into a kind of “Adirondack Luau.” Then club member Ralph Montello heard about a small school bus for sale in Saratoga County. Permission was obtained from the Gore Mountain Ski Lift Corporation, operator of the Ski Bowl, to park the bus on its property for the season. Several members chipped in to make the purchase, the seats were rearranged along with the sides of the bus, and a coal stove from a wrecked D. & H. caboose was installed. Tom “Buckshot” Butler, a Backwoods Club Member back in that day, considers it the “wild years at Little Gore.” 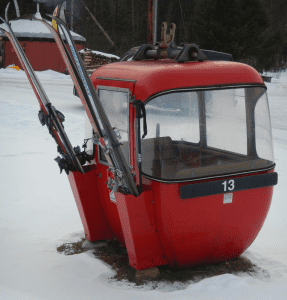 Gore Mountain Ski Lift Corporation had second thoughts. According to Ernie Johnson, the bus was parked for only one season (1963-64), but others say it was there for as many as three years. When “New Gore” opened in the winter of 1964-65, the Backwoods Club was encouraged to relocate to the more expansive skiing and base lodge.

Club members were then, and remain now, mostly a bunch who ski and socialize. Older members recall a great deal of fun in the early years with tales of Riding’s (now Basil & Wicks), or the American House or Ferrell’s Hotel, or Pierson’s Tavern. Club member Harry Demarest operated the North Country Lodge in Warrensburg, a spot Club members often gathered.

Ernie Johnson once wrote that the Backwoods Ski Club was not a club in an organized sense of the word. “No officers, no meetings, or any other bureaucratic trappings that characterize what is commonly known as a club,” Johnson wrote. “No officers, meetings, dues etc. occasionally a collection to finance one-thing-or-another. It is nothing more than a group of friends at Gore Mountain who ski together, enjoy lunch together, and sometimes party together.”

Have Gore mountain history to share? There are other ski groups at Gore Mountain with varying degrees of formality: GOOFS (Gore Organization of Frequent Skiers), FROGS (First Run On the Gondola Skiers), Ladies Escape, Outlaws, A Team, and Gore Ski Club (many NYSEF parents and supporters). Do you know of others? Feel free to comment below, and they might be included in an upcoming history of Gore Mountain skiing.

Photos, from above: Backwoods Ski Club logo; middle, map of Old Gore and Village Slopes (c. 1940s); and below, an old gondola car from “New Gore.”