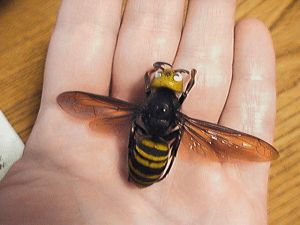 My son, wise beyond his years it would seem, taught me an invaluable lesson when he was a teenager living at home. Any time I got worked into a froth about a broken car, leaky roof or other serious, but non-cataclysmic setback, he’d put things in perspective for me: “Pops, it could always be worse – you could be on fire.”

This is a good model to apply to invasive species. Depending on the situation, they can wreak some genuine havoc, but sometimes the perception of danger is so far overblown that other problems ensue. It’s important to place an issue in the proper scale, beyond the fact that we are hopefully not surrounded by flames at the moment.

“Murder hornets” are a perfect example. Known in polite society as the Asian giant hornet (Vespa mandarinia), it is the largest hornet in the world, measuring 1.5 to 2 inches (38-51 mm) long and weighing up to one ounce (28 grams). They feed on many insects, including some pest species, but they also destroy and consume honey bee colonies at a terrifying pace, and would be a tremendous threat to apiaries if they were to get established in North America. What has really grabbed our collective attention, I think, is the danger they pose to us. With their extra-long, robust stingers and large venom sacs, Asian giant hornets can in fact kill humans. It’s the poster child for unbridled foreign malevolence. Now the good news about the bad news, because perspective is critical.

The Asian giant hornet is less dangerous to us than the bees that are already here. According to the US Centers for Disease Control, an average of 62 people die annually in this country from bee, hornet and wasp stings. On the other hand, the Northeast Invasive Species Center reports that no more than 12 people per year are killed by the supposed “murder” hornet in East Asian countries where it is native. These include India and China, whose respective populations are many times that of the US.

A 2002 study concluded they almost never build nests in buildings, but rather underground, or occasionally in a the lower section of a hollow tree. And although they have an ample supply of venom, the stuff is less acutely toxic than honey bee venom. In addition, Asian giant hornets are less aggressive than our native yellow jacket species.

Also, it’s NOT HERE in the Northeast! I mean really not here – Ireland is closer to the US than we are to the Asian giant hornet. At the moment, it has only been found in a few locations on the Pacific coast in northwest Washington state and southwest British Columbia, and in every case within a few miles from the ocean. US Federal authorities and their counterparts in Washington State and British Columbia have initiated a massive push to locate and destroy nests. Unlike the spotted lanternfly, whose egg masses have been accidentally shipped thousands of miles in cargo, the “murder hornet” does not have the same proclivity for hitchhiking, and there is no reason to believe it will spread quickly.

Finally, overstating the hazard posed by Asian giant hornets has encouraged folks to persecute all sorts of similar insects, including species of flies and even dragonflies. We may not be overly fond of bald-faced hornets, yellow jackets or paper wasps, but they help keep pest populations in check, and are important as pollinators as well. Here is a hint to tell if a nest is that of the Asian giant hornet: if you can see the nest, it’s not them!

Citizen science is very important in the fight against invasive species, but proper education has to come first. To avoid killing helpful lookalike species, you can find a picture gallery of similar insects online. If you are concerned you may have found a “murder hornet,” please take a picture and then call your local Extension or NY State Department of Conservation office for instructions on how to proceed.

Residents of Northern NY State have much to be grateful for. In addition to all the good things we have, there’s a litany of bad stuff we don’t have. Kissing bugs, brown recluse spiders, tree-of-heaven, termites, and now Asian giant hornets should be on that list. Remember, things could always be worse, and I suggest changing the batteries in your smoke detector, just in case.