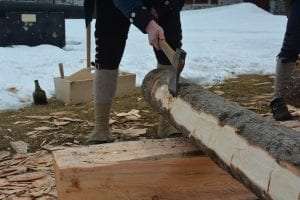 Fort Ticonderoga is set to continue its Digital Campaign with interactive programming, engaging lectures series, and creative at-home educational activities and resources in 2021.

Fort Fever Series: Uncovering the Pavilion Collection on Sunday, January 10th at 2 pm via Zoom. Built along the shore of Lake Champlain as a private retreat on the grounds of Fort Ticonderoga, the Pavilion served as a summer home for many generations of the Pell family. Over the last two years, as a Fort Ticonderoga Curatorial Assistant, Meredith Moore has worked to document the extensive collection of fine, decorative, and folk art from the Pavilion that has accumulated for over nearly two centuries, making it accessible to the public for the first time. Join Meredith as she highlights the gems of the collection, the exciting discoveries, and the methodical process of reconciling over a century’s worth of documentation. This program requires pre-registration. Fort Ticonderoga Members receive free admission; $10 for the general public.

Collections Speed Dating: Liège Muskets on Wednesday, January 13th at 1 pm via Facebook. Produced through the Tower of London and Dublin Castle the arms produced by the Ordnance Department gave the British soldier among the finest military arms of the 18th century. Fort Ticonderoga’s Curator, Dr. Matthew Keagle, will explore Britain’s Belgian solution to its musket shortage when production couldn’t meet demand as the Revolutionary War expanded.

Ticonderoga’s First British Winter on Saturday, January 23rd at 1 pm, via Facebook. After almost five years of struggle, Fort Carillon finally fell to the British in July of 1759. Now a critical point on the route to Canada, British forces began to rebuild and repair the French barracks and fortifications, setting the stage for the longest any army had occupied the recently christened Fort Ticonderoga. Attendees will learn about the challenges faced by the British garrison of Ticonderoga during its first British winter.

Fort Fever Series: Thomas Macdonough, the U.S.S. Ticonderoga, and the War of 1812 on Lake Champlain on Wednesday, January 27th at 7 pm, via Zoom. At the dawn of the 19th century, the region once again braced for an anticipated British invasion from Canada. A young naval Lieutenant, Thomas Macdonough, took on the challenge to defend and hold on to Lake Champlain in the face of a Royal Navy bent on controlling Lake Champlain. Learn about Macdonough and his fleet, including the first United States naval vessel Ticonderoga, in this presentation by Rich Strum, Fort Ticonderoga Director of Academic Programs. This program requires pre-registration. Fort Ticonderoga Members receive free admission; $10 for the general public.

From the Ground Up: Buttons on Thursday, January 28th at 1 pm, via Zoom. From 18th century soldiers to 19th and 20th-century tourists, learn about the different buttons found at Fort Ticonderoga in this new episode of From the Ground Up.

Virtual Living History Event: A Day Longer in the Field on Saturday, January 30th. All programs will be featured on Facebook starting at the listed times:

11 am – Timber!: In the fall and winter of 1759, the British Army worked to rebuild Fort Ticonderoga. Watch each swing of the axe and each pass of the saw as New England soldiers gather the needed timber to rebuild the fort.

1 pm – The Long Haul with Oxen: Witness the power of oxen! See Red Devon Oxen, a common 18th century New England breed, in action as they haul logs from the woods just like in 1759.

2 pm – Hewing Beams: Watch as provincial soldiers snap a line and carefully cut with their axes to hew round logs into usable square beams.

4 pm – “A road to be marked and cut…may be come known to and frequented by the people of New England”: General Jeffrey Amherst agreed to let New England provincial soldiers return home at the end of 1759 on the condition that they built a road to get there. Discover how this military road over the Green Mountains set the stage for Vermont, the Revolutionary War in the Champlain Valley, and remains a part of our geography today.

Photo of A Day Longer in the Field event courtesy Fort Ticonderoga.