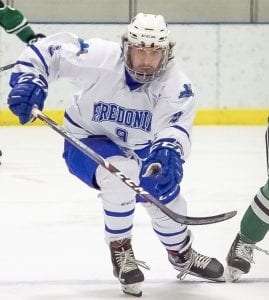 An investigation revealed 22-year-old Bernhard “Tanner” Kahlau, of Mountain Top, Pennsylvania, lost control and struck a tree while skiing down the upper portion of the Approach Trail. The black diamond trail on Little Whiteface is rated “most difficult.”

His body was removed to the University of Vermont Health Network at the Champlain Valley Physician’s Hospital in Plattsburgh where an autopsy was completed on January 13, 2021, by Dr. Cara Soper. Dr. Soper determined the cause of death to be a cervical skull fracture due to the accident. The manner of death is ruled accidental.

Kahlau was on the hockey team at SUNY Fredonia. The team’s coach issued a message:

“To say Tanner was a great teammate is not doing him justice. He was a teammate that everyone loved. His kind demeanor, easy way, and welcoming smile made him a leader, confidant, and friend to all. He was a ‘team first’ guy and would do anything for his boys. Tanner was incredibly humble and I am fortunate to be able to say I worked with him and got to share in his college experience. Our Fredonia family is strong and we will need that strength to support each other as we mourn the loss of such a valued member of our family. God bless Tanner and his family.”