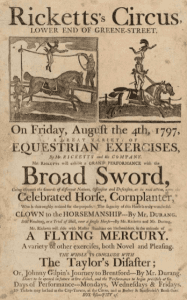 Equestrian artist Philip Astley was a pioneering entertainment entrepreneur. His demonstrations of trick horse-riding at London’s Royal Amphitheatre in 1768 constitute the origins of modern circus.

Astley performed his routine in a circular arena which would subsequently be referred to as the ring. He interspersed his displays with a variety of additional acts. Both in Europe and America other producers copied and expanded his new style of entertainment. 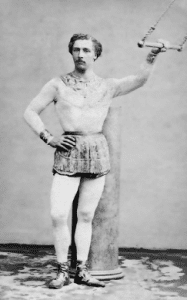 By the 1860s the familiar components of circus amusement were established. These included intrepid rides on horseback; the hilarity of clowns; the trickery of jugglers; the bravery of tightrope walkers; and the physical skills of acrobats.

In November 1859, Jules Léotard performed the first flying trapeze routine at the Cirque Napoléon in Paris. He arrived in London in 1861 to stun the crowds with his act at the Alhambra, Leicester Square, which inspired George Leybourne in 1867 to compose the famous lines:

He’d fly through the air with the greatest of ease,
That daring young man on the flying trapeze.

Léotard’s one-piece and skin-tight garment made its way from the circus into ballet studios. It is now known as a leotard (the term was first recorded in 1886).

Before the advent of cinema, circus was the favored form of enjoyment. The passion reached its peak between the two World Wars. In post-war Germany mass entertainment played a role in distracting a traumatized society. In 1918, forty-three circuses toured the country. Stationary circus buildings that rivaled theaters were opened in major cities: Krone in Munich, Sarrasani in Dresden, Busch in Berlin, and Hagenbeck in Hamburg.

Hitler and his second-in-command Hermann Göring both loved this form of entertainment in spite of the fact that the “gypsy milieu” of the circus included Roma and Sinti, and that some of trapeze artists they admired were Jewish. Inevitably efforts were made to “Aryanise” the circus. As many traveling outfits were owned by Jewish families (Blumenfeld, Lorch, Strassburger, and others), the Nazis would eventually split the circus community. By the beginning of the war, they had purged most circuses of their non-Aryan performers.

Circus was introduced to the United States by John Bill Ricketts, an equestrian who had begun his theatrical career with London’s Royal Circus and Equestrian Philharmonic Academy. In 1792 he settled in Philadelphia where he opened Ricketts’s Art Pantheon and Amphitheatre. In April 1793, Ricketts gave America’s first complete circus performance, which soon became a highly successful regular event (enjoyed by George Washington and later by John Adams). 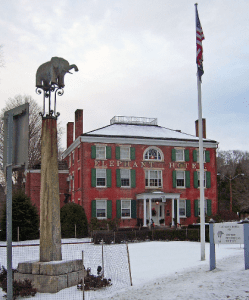 Fifteen years later, Hachaliah Lyman Bailey purchased an Indian elephant which he named Old Bet. It was one of the first such animals to reach America. The public’s curiosity made him decide to take her on tour, walking with the animal from town to town under the cover of night, in order to prevent anyone from having a free look at the elephant.

His treks were the first of their kind and inspired numerous others to tour with exotic animals. Later, with Old Bet as its main attraction, he founded Bailey Circus. The undertaking must have been lucrative. Between 1820 and 1825, Bailey built the Elephant Hotel in Somers, New York. In front of the hotel stands a monument dedicated to Old Bet.

The American circus was revolutionized by P.T. Barnum, and its influence brought about a considerable change in the character of the modern circus. Traditional acts were superseded by ambitious, acrobatic performances, requiring a greater number of performers, often aided by complex machinery. 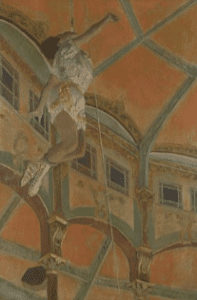 From the nineteenth century onward, urban entertainment provided a fertile source of imagery for artists. Themes of leisure and entertainment had their roots in French painting. Circus, theater, ballet, and café-concert were part of a rich patchwork of subjects.

Approaches varied widely, ranging from Édouard Manet’s eye for the response of onlookers to Edgar Degas’s peek into the workings of back-stage preparation. In addition, the structural setting of the circus ring challenged the creation of perspectives that evoked the experience of spectatorship.

Public demand for novelty made the circus environment fiercely competitive. To attract attention, performances had to be breath-taking. In 1879, Renoir painted two female acrobats at the Cirque Fernando in Montmartre. Degas frequented that circus the same year and painted Miss La La, an acrobat being pulled up to the dome’s rafters by a rope clenched between her teeth. 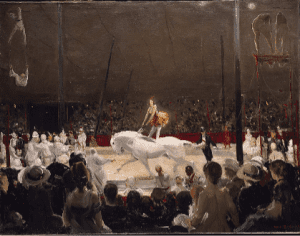 In the summer of 1912, George Bellows attended a charity circus organized by his wife Emma Bellows in Montclair, New Jersey, which inspired him to paint The Circus which was one of fourteen submissions that the artist exhibited at the 1913 Armory Show. As in his earlier boxing depictions, the scene is painted from the perspective of the crowd, providing the viewer with a momentary glimpse into the performance as it unfolds under the big top.

Although Bellows had never visited Paris, his work stands in a French post-Impressionist tradition which he had encountered at the Armory. Excited by movement and physical agility, these artists had grasped the flamboyant side of the circus occasion, reveling in all its external aspects.

When commissioned to produce illustrations featuring the Ringling Brothers and Barnum & Bailey’s Circus for the National Police Gazette, Pennsylvania-born sculptor Alexander [Sandy] Calder got hooked on the spectacle of mobility. Circus artists had mastered the principles of balance and suspension in the air. Fascinated by kinetics, he set out to explore the artistic possibilities of movement. 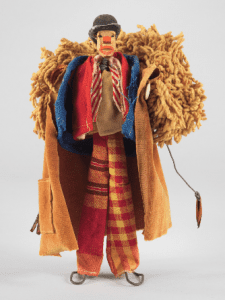 In 1926 he established a studio at 22 Rue Daguerre, Montparnasse, where he befriended a number of avant-garde artists, including Fernand Léger (himself a circus devotee) and Marcel Duchamp. In the years that followed, he produced the Cirque Calder. This intricate work displays an array of over seventy figures and animals, including jugglers, sword swallowers, and clowns, that were crafted from cork, wood, paper, and string. Each miniature was assigned a series of movements operated by the artist himself.

With performances (lasting two hours) in Paris and New York through the 1930s, Calder’s circus – now part of the permanent collection of New York’s Whitney Museum – cemented his reputation as a vanguard artist. These efforts preceded the kinetic art that the sculptor would develop in the course of his career.

Calder was intrigued by the mechanics of the circus which, in a sense, does not differ from the Impressionist passion for movement and balance. Artists associated with German Expressionism, under threat of darkening socio-cultural developments, turned from dynamics to psychology.

Tears of a Clown 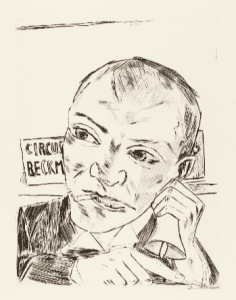 Toulouse-Lautrec had shifted attention away from the external spectacle towards inner scrutiny. His fascination with performers coincided with the emerging concept of “other” in society. In his paintings and drawings, circus troupers and artists share the fate of being outsiders. The entertainer’s mask conceals a vulnerable individual. The sad performer who amuses the public but is himself an estranged figure, became an established trope in art and literature. Melancholy and alienation – the tears of a clown – are part of circus iconography.

Max Beckmann’s oeuvre was shaped by the war slaughter he had witnessed as a medical orderly. In 1922 he published a series of ten etchings entitled Der Jahrmarkt (fair). The first plate entitled “Der Ausrufer” (town crier) shows the artist as barker summoning custom to “Circus Beckmann.” These thespian scenes are metaphors for social corruption. Life is a circus with torturers as ringmasters and killers as clowns. 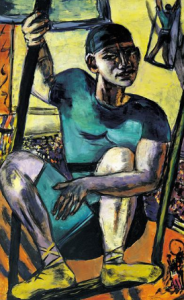 In 1937 the Nazis condemned his work as “degenerate.” Although not Jewish, he was sacked from his teaching post at Frankfurt’s Art Academy and forced into exile. Living in occupied Amsterdam, he painted Akrobat auf dem Trapez (1940). The circus is a hostile gathering; the acrobat a self-portrait. Beckmann, the displaced artist, suspended in mid-air, is at the mercy of the faceless mob below him.

The painting is held at St Louis Art Museum. Beckmann had moved to the United States in 1948 to teach at Washington University. That same year St Louis organized the first retrospective exhibition of his work in America.

Having obtained a professorship at the Brooklyn Museum Art School, the painter resided at 38 West 69th Street, Manhattan. In 1950, while on his way to the Met, Beckmann collapsed in the street. His last paintings abounded with allegories of expulsion, conveying an intense sense of strangeness. A creative life scarred by the warmongering of delusional politicians had come to a premature end in the solitude of exile.