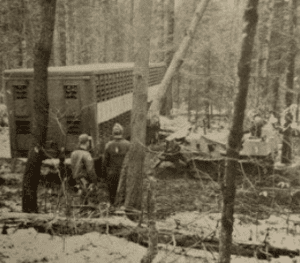 On December 15, 1973, Canadian Charbot Germain attempted to drive his tractor-trailer from Stony Creek to Utica. It didn’t go well.

It started out as tales of the lost often do, with directions from a local.

They suggested Germain shorten his trip by taking Route 8 from the Northway toward North Creek. He found himself instead in Stony Creek, headed down the rough Harrisburg Road in the dark.

Harrisburg Road was once a town road through what is now the Wilcox Lake Wild Forest and on to Hope Falls, in northeastern Hamilton County. In 1973, it was a mostly dirt road that ended near Harrisburg Lake. Beyond, the old road was maintained as a snowmobile trail. At the time, Forest Ranger Charles Severance said it could be negotiated with a four-wheel drive vehicle, “if one doesn’t care much for the vehicle.”

“Charbot, comfortable in the heated cab of his $28,000 tractor, was undaunted,” Barney Fowler recalled in Adirondack Album. “With the empty rig singing its song of squeaks, grunts and groans, he crossed the narrow causeway at Harrisburg Lake and took off.”

“What was he thinking of when he started climbing over the boulders and going through the mud-holes with brush and tree limbs dragging over his windshield, I don’t know,” Ranger Severance said. “But it didn’t faze him. He kept right on going.”

And go he did. For three and half miles into the dark, illuminated only by headlights, over a couple inches of fresh wet snow. “He was a determined man,” Fowler noted, “and he had a job to do.” 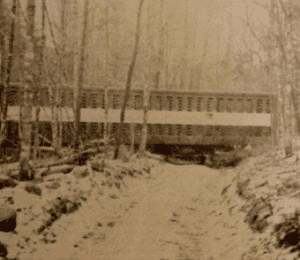 Determination, of course, wasn’t enough. Charbot Germain eventually reached a grade near Wilcox Mountain that he could not climb. As the truck reached its limit it began to slide back and jack-knifed. In the process the fuel line was fouled and the engine began stuttering. Then the rain came.

“So there he was,” Severance told Barney Fowler “to hell and gone, out in the boondocks, miles from the nearest house, in pitch black, and getting colder than hell. He went back to two hunting camps, tried to get in, but both were locked and though he easily could have broken in he made no attempt to do so. He spent the night crouched in his cab in a foreign land and almost froze. The engine was running so poorly he couldn’t get any heat.”

It poured rain the whole next day until finally a jeep coming north encountered the incredible sight – a tractor trailer in the middle of the woods. They picked-up Charbot Germain and drove him to the ranger at Stony Creek, Lynn Day.

The next morning, rangers Severance, Day, and Mike Hagadorn (who spoke French), together with fire wardens Tom and Lou Fisher, headed into the woods to see what they could do. They brought along some chain, and an International 500 bulldozer.

Using the dozer, they managed to unhook the tractor from the trailer, get them swung around and headed back north. They reattached trailer to tractor and with the dozer pulling made it back to Harrisburg Lake and eventually back to Stony Creek. In the end, the fuel line repair and a patched radiator were all that was needed.