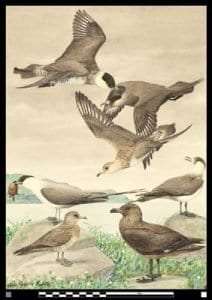 Fuertes’ watercolors celebrated the beauty of wild birds, while Eaton advocated for the stewardship and conservation of birds and their habitats. Produced by the New York State Museum and published by the University of the State of New York, the Birds of New York inspired the citizens of New York to observe and care for the state’s birds.

The book was commissioned by former State Museum Director John Mason Clarke, who served from 1904 to 1925, wanted a new study that would update scientific knowledge. He commissioned Eaton, a biology teacher in Rochester, to research and write the book. Eaton enlisted Fuertes, a famous bird artist from Ithaca, to provide the illustrations.

Clarke’s written correspondence with Eaton and Fuertes, now preserved in the New York State Archives, reveals that Clarke was a guiding force in producing the book, sometimes attending to even the smallest details.

Named for the naturalist Louis Agassiz, Fuertes’ interest in the natural world was encouraged and he began to draw birds at an early age. He attended Cornell University in Ithaca. While still a student, Fuertes met a prominent Smithsonian ornithologist who recognized and promoted his artistic talent. This helped launch an active career and, soon, he was considered to be among the leading bird artists of his day.

Just as John James Audubon inspired bird painters in the early 1800s, Fuertes influenced artists a century later by skillfully capturing the lifelike poses and natural settings of birds. Roger Peterson, an avian artist and author of well-known field guides, wrote that while Audubon was famous for his dramatic compositions Fuertes “caught more of the character of the bird itself.”

Eaton was also a lifelong student of natural history. As a young man he prepared bird mounts and studied skins after enrolling in a taxidermy course. He established the Department of Biology at Hobart College in Geneva, NY, where he taught from 1908 until his death in 1934. In 1901 he became known statewide when the Rochester Academy of Science published a paper he had written on the birds of Western New York.

The lasting scientific importance of Birds of New York stems from Eaton’s authoritative compilation of original research that is included in the book, such as distribution maps, migration surveys and detailed observations of nests, eggs, songs and behaviors. The book continues to be cited by ornithologists studying changes in bird abundance and distribution since that time.

It also has strengthened interest in the study and protection of birds, and spurred the formation of local birding clubs and bird sanctuaries. Sixteen thousand copies of a print portfolio, including all of the color illustrations in the book, were widely distributed and inspired “Bird Day” celebrations across the state.

The Atlas of Breeding Birds in New York State

New York’s first Atlas of Breeding Birds in New York State was published in 1988, edited by Robert F. Andrle and Janet R. Carroll. It set another new standard for New York State scientific bird compendiums. Most notably for its inclusion in crowdsourced bird data from across the state.

Each species listed features a black-and-white illustration of the bird, color maps of the current (2000-2005) breeding distribution and of the twenty-year change in distribution, and an overview of the species’ breeding range, habitat preferences, history in the state, trends in distribution, and conservation implications. The book not only chronicles shifts in bird distribution but also celebrates the 244 species that breed within the state’s borders by showcasing majestic landscape paintings of family groups and original artwork of each species.

In addition to the species accounts, there are chapters on methodology, results, habitats, land use, history of New York birding and ornithology, conservation, and appendixes of rare breeders as well as an updated table of the seasonal timing of breeding that completes this monumental work. The documented changes in bird distributions and land use in this stunning celebration of New York’s birds will be of critical interest to both birders and conservationists.

Long-term changes in the distribution of bird populations can be driven by habitat alteration caused by development, deforestation, and climate change, but significant change also occurs in the short term.

Based on statewide research efforts conducted from 2000 to 2005, the second edition of the Atlas of Breeding Birds in New York State shows the surprising amount of change in the distribution of breeding birds in New York that had taken place since the first edition, twenty years before.

A few species no longer breed in the state (e.g., Loggerhead Shrike), a few breeding species were gained (e.g., Merlin and Black Vulture), and over half of the species changed their distribution in the state, some dramatically. The consistency of survey methods in the two atlas efforts, including census of the same 5,333 survey blocks, allows for statistically significant comparisons.

Starting in 2020, five years of field surveys will be conducted by volunteers and project partners to provide the data that will be analyzed to create the third New York State Breeding Bird Atlas. New York is expected to be the first state in the nation to implement a third breeding bird atlas.

In addition to detailing the current distribution of breeding birds in the State, the data can be used to evaluate trends in distribution and species abundance, as well as assess the response of various species to climate change. These changes in distribution help identify species that may be in trouble and allow for the development of management programs to help address those declines.

To participate as a citizen scientist, make a free eBird account and submit data online through the atlas website or via the eBird mobile app. Simply record the species and any breeding behaviors observed. All sightings can count. As observations are reported, data can be viewed on the atlas website.

An exhibit on the Birds of New York and the paintings of Louis Agassiz Fuertes was held at the New York State Museum in the Spring of 2010, showcasing the original watercolors. It featured 40 of more than 100 paintings that Fuertes created to illustrate Birds of New York along with a first edition of the book, a print portfolio and specimens from the Museum’s ornithology collection.

The Birds of New York book is available online through the New York State Library’s digital collections at http://www.nysl.nysed.gov.